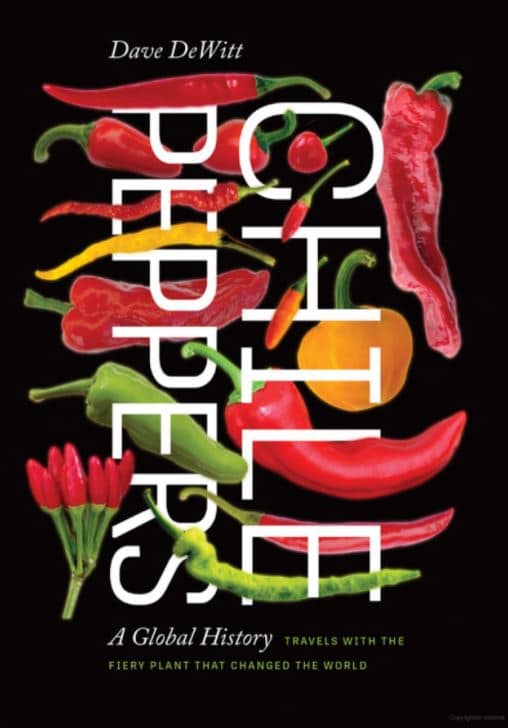 Compiling 44 years of writings, Dave DeWitt, the “Pope of Peppers,” has put together a book every bit as colorful as the chiles he loves.

The creator/producer of the National Fiery Foods & Barbeque Show in Albuquerque, which began in 1988 and is still being held at the Sandia Resort and Casino, DeWitt begins by introducing us to five domesticated species of chiles, providing concise descriptions and close-up photographs of each.

Two of the species—bacctum and pubescens—were unfamiliar to me. But the others have become commonplace in the American diet: annuum (bells, jalapeños, cayennes, anchos and serranos), chinense (habeneros) and frutescens (tabascos).

After an opening chapter that explains how a “tolerated weed” came to be domesticated, the body of the book is organized geographically. DeWitt has visited each of the regions covered in the book, from the Caribbean to Africa to Asia. Given pandemic travel restrictions and the author’s warning that some countries he visited have since become more dangerous, the reader is the lucky beneficiary of his firsthand experiences and research into the agricultural and cultural history of each region.

All species in the capsicum genus originated in South America, we learn in Chapter 1. In fact, chiles were one of the earliest plants domesticated there. DeWitt traces those origins as far back as possible, to Pre-Colombian times in the Bolivian/Brazilian area, where pots excavated there reveal traces of chile peppers and chocolate cultivated from wild plants by the Incas, Mayans, and Aztecs.

Only three species—annuum, chinense and frutescens—migrated north, becoming commercially important. A photograph in this chapter showing an African grey parrot munching on a pepper pod surprised me, but that is how chile seeds were thought to have spread. Only later in the book is it explained that mammals are sensitive to the heat of chiles, but birds are not.

A section at the end of each chapter is devoted to recipes gleaned from restaurants, cultures and nations of each region. The reader can reap the rewards of the author’s investment of time, money and effort in scouring the world by cooking traditional dishes at home, all the while remembering the interesting characters the author encountered in gathering up these classic recipes from Jamaica to Malaysia.

I brewed a hot cup of the Xocolatl: Royal Chocolate with Chile. A sweet vegan drink featured in Chapter 1, it had me reflecting on how ancient Mayan society employed now-staple ingredients to make something that still tastes delicious millennia later.

The recipe sections are printed on solid-colored pages the reader can see at the edge of the book, enabling its use as a cookbook. The first page of each chapter is a solid color, too, that matches its recipe section. Beautiful!

Chapter 4, titled “The Spicy US States,” treats us to a hilarious transcription of a shoot for a television show called “Heat Up Your Life” for which the author served as host. Filmed near Lafayette, Louisiana, it featured chef Scott Landry demonstrating how to properly cook and season an alligator. “The most important thing,” the chef advised DeWitt, “is to cut all that fat off, because that fat, oh man, that is nasty.”

Chapter 4 also takes us to colonial America, telling us that Thomas Jefferson cultivated several types of chiles at Monticello. The author spoke with Peter J. Hatch, the director of the gardens and grounds for the Thomas Jefferson Foundation. I thought it was funny that someone named Hatch would be in charge of chiles grown on the east coast.

The final two chapters of the book are, like the first chapter, organized thematically. In Chapter 9, titled “Hot Means Healthy,” DeWitt gives a nice explanation of how the Regolex plant in Radium Springs processes the paprika pepper that the owner of the plant also grows. We have all noticed the plant on the east side of I-25 and wondered about it. Regolex’s oleoresin paprika is used primarily by food processors to add color to their products. “It is an ingredient in chicken feed because it enriches the color of egg yolks, and gives gray chicken meat a pinkish hue,” DeWitt reports, providing perhaps more information than we need.

The author waits until this chapter to present the biography of Wilbur Scoville, the pharmaceutical chemist who was the first person to quantify the heat of chile peppers. A table of the Scoville Heat Units of several chile varieties is not to be found until page 283. Wrangling 44 years of research occasionally results in inconveniently placed information such as this.

Another criticism is that there are no geographical maps, so I found myself a bit lost at times and had to refer to my own world map. But the book, which concludes with a chapter titled “Chiles Become Legendary,” is written with such enthusiasm that any shortcomings can be forgiven.

Part memoir, part travelogue and part cookbook, this volume supplies a bounty of intricately detailed anecdotes and adventures with a purpose: to share the lore, mystery, history and flavors of chiles from around the world.

Rhonda Brittan owned and operated Black Cat Books & Coffee, a used book store and community gathering place, in Truth or Consequences from 2001 to 2019.  In retirement, she has been able to spend more time with her husband at their Hillsboro cabin and taught herself to play an inherited ukulele. But she still enjoys turning people on to literary and non-fiction classics.