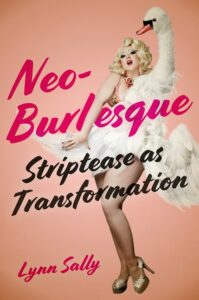 This remarkable treatise on a formerly taboo subject is a serious examination of an art form that has been tossed off as frivolous entertainment. Truth or Consequences’s own Lynn Sally proves that striptease can also be political protest, and, when done with humor, this outrage can be powerfully expressed through frequently outrageous parody.

Sally, who has organized and performed in burlesque shows here under the stage name of Dr. Lucky, became interested in burlesque when she was working on her doctorate in performance studies at New York University. She accepted an invitation to dress up as a cigarette girl for a show at a swanky midtown Manhattan supper club—and was hooked. She realized that she would have to keep her academic career separate from her newfound occupation. Other performers had been fired from their day jobs when their nightlife was discovered.

Sally became a professor by day and, fearing repercussion from academe, a burlesquer by night. This put her onstage, backstage and on the road with the performers she interviews and writes about in this book, giving the reader a passionate, personal and spectacular insider’s perspective of this wildly irreverent performance art. Asserting that self-revelation is less harmful than choking on fear, she presents herself in the book as a “vulnerable observer,” opening her experiences as a striptease artist and as a member of the audience to full scrutiny.

The author explains how neo-burlesque is different from classical theater. Whereas burlesque performance is all about self-authorship, in theater, actors play characters written by someone else. Burlesque also works best when the audience is actively involved, and, in this way, pokes fun at the formality of traditional theater. Performing a striptease is transformative for the artist, and Sally hopes to prove in this book that it has the power to transform its audiences, as well.

Sally reveals the history and purpose of neo-burlesque, a term she uses to “designate a performance practice and participatory culture that is connected to, but represents a historical and performance break from, antecedent forms of burlesque.” Her aim is to establish striptease as a viable and valuable subject of serious

study. She digs into the intricately complex reasons that make neo-burlesque a “uniquely corrosive and therefore dangerously anarchic cultural force.” It disrupts, rather than reinforces, the social norms that police how women are expected—and thereby bound—to inhabit public space.

Every neo-burlesque performance has a story to tell, with a punchline or political jab at the end. The artist’s “exaggerated presentation of self” hooks the audience’s attention. While the stories naturally evolve in response to changing social and historical contexts, they are all, Sally argues, “emblematic of a new kind of feminism that revels in the explicit female body as a site of agency that tells stories full of good-humored fun, sizzling sexuality, and political import.”

But the book is not solely a scholarly treatise. Sally delights in taking her reader right into adult entertainment nightclubs via the book’s fabulous color photos, giving them front row seats, as one reviewer put it, as Sally “shines a spotlight on the “most iconic performers of the last two decades.”

We meet, for example, Dirty Martini, who graces the book’s cover. A member of the board of the Burlesque Hall of Fame, which is dedicated to preserving the history of the art form, Martini performs her “classic broad” routine with a big, knowing wink that conveys her self-possession. Bunny Love is also in on the joke on unsuspecting audiences. In an interview with the author, Love shares a quintessential tip of the neo-burlesque trade: “Even if you want to make a strong political statement, if you put a little twist of comedy in there, it’s a lot easier for people to take. And enjoy. And probably think about longer.”

Sally’s description of MsTickle’s stupefying performance in her “Blowup Doll Act” is accompanied by several jaw-dropping images that powerfully portray, as Sally explains, a “compelling narrative of women’s continued subjugation through layers of costuming, imagery, and meaning.

The New York Times praised Julie Atlas Muz, whose act is grounded (she told the author) in “politically pointed nudity,” as a “feminist stripper.” After seeing all these stunning photos and reading this hilarious, thought-provoking and wickedly entertaining book, the reader comes to understand that this is not a paradoxical term.

Editor’s Note: Sally, who is also the author of “Fighting the Flames: The Spectacular Performance of Fire at Coney Island,” will give a reading from “Neo-Burlesque” on Friday, Oct. 22 at the Rio Bravo Fine Art Gallery, 110 N. Broadway St. in Truth or Consequences. Doors open at 6, and the reading is at 7. As there is limited room, seating will be on a first come, first served basis. Masks and social distancing requested. Copies of “Neo-Burlesque” will be available for purchase for $26.95, plus applicable tax.

Rhonda Brittan owned and operated Black Cat Books & Coffee, a used book store and community gathering place, in Truth or Consequences from 2001 to 2019.  In retirement, she has been able to spend more time with her husband at their Hillsboro cabin and taught herself to play an inherited ukulele. But she still enjoys turning people on to literary and non-fiction classics. 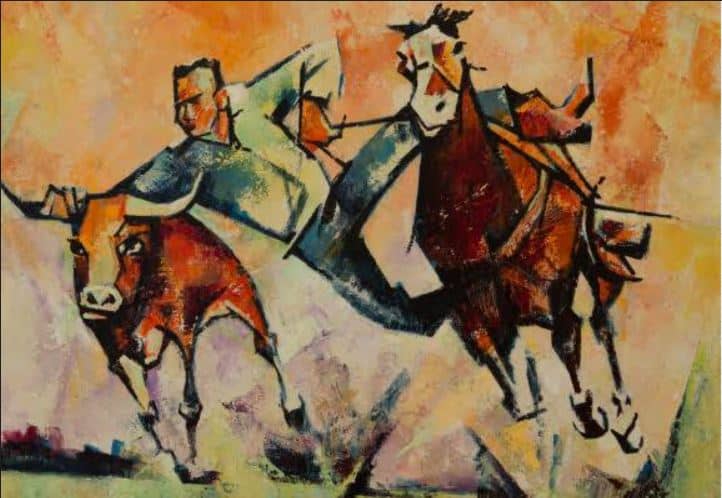 This exhibition features the paintings and prints of one of Silver City’s most accomplished citizens. John Stermer studied art for 20 years in New York, Paris and Barcelona before moving to Silver City in 1959 to work in a mine. Ten years on, he suffered health problems and retired from hard labor. He spent the the two decades painting, teaching and introducing several genres of art to this region.

Stermer’s striking and appealing paintings of southern New Mexico leave an impression on most who enjoy fine art. His life story is also fascinating, and the exhibition will cover his biography from his birth in 1920 to his death in 1991 and illuminate his impact on the region as a New Mexico Arts Commissioner and president of the Silver City Arts Council during the 1980s.

Click here to learn more about Stermer’s life and preview examples of his work, which will be available for sale during the exhibition.
HAVE YOU SEEN?

Analysis: Virgin Galactic may be close to taking off, but Spaceport remains earthbound, Part 1

The wealthy continue to reserve seats on VG spaceflights, but neither the state nor Sierra County will receive gross receipt taxes on hundreds of millions of dollars in ticket sales when regularly scheduled spaceflights begin here, thanks to one of several giveaway incentives approved by the state legislature in 2003 during spaceport advocate Bill Richardson’s first year as New Mexico governor.

Reader John Wilks of Winston commented: The Spacepork is another Bill Richardson boondoggle! When I learned in 2007 that the proposed facility could <em>not</em> be modified to become a regional airport, in the event of financial failure as a launch site, I knew the fix was in. When a local contractor received the first change order, practically before the initial runway concrete was cured, to extend the runway length, my suspicious were confirmed. When the road to the facility was paved from Doña Ana, the Spaceport visitors’ center off I-25 was canceled, and the future build-out plan for the facility include an on-site hotel was published, the confirmation that Sierra County had been little chance to recoup its “investment” was apparent. Lastly, when the authorization for the facility management to contract with out-of-state vendors for goods and services was announced, the fate of New Mexico and Sierra County workers and businesses was sealed.

The county must walk away from their deal, file a lawsuit for fraud and misrepresentation, and cease sending tax revenues to the state for additional hand-outs to the Spacepork management.

More than a dozen residents spoke out against the “Riverwalk” economic development feasibility study during public comment at the Nov. 17 Truth or Consequences City Commission meeting—to no avail.

Reader Jack Noel of Truth or Consequences commented: During the past couple of summers, when the river was running and people were flocking to our community to raft down it, I wrote letters imploring our city commission and “Main Street” to act. I asked them to recognize the economic benefit that this ride down the cool river would bring. I asked them to cater to these folks, who were telling us what they wanted, by painting over the graffiti on the bridge, providing trash containers and to periodically show a police presence to reassure the safety of vehicles left behind.

There was no response, no acknowledgment other than the usual excuses: no funds, no personnel and “not our jurisdiction.” It took private business to build up river rafting as an economic benefit.

Now we are looking to a Riverwalk to save our economic asses. Does Wilson & Company run our city or do the citizens? A car bridge to get more traffic on the east side that is already out of control with the ORVs and tweekers? Sole benefit to the land owners, more detriment to the environment.

It would be nice to have a footbridge across a semipermeable dam, perhaps some re-constructed wetlands and an effort to restore the river’s ecosystem. Where are the hackberries that once were part of this system? Where is the money we do not have going to come from? For either project? More debt we cannot pay?

I feel our leaders have lost touch with reality . . . where are the tourists going to come from when gas hits $5 a gallon and restaurants cannot get enough food to serve or you can afford? We are going to have our hands full just taking care of those in our community as inflation (food, heat) goes through the roof. It is time for our leaders turn off mainstream media, get their heads out of the sand and begin to take steps to safeguard the community. We are not going back to the way things were. The new normal will be survival.