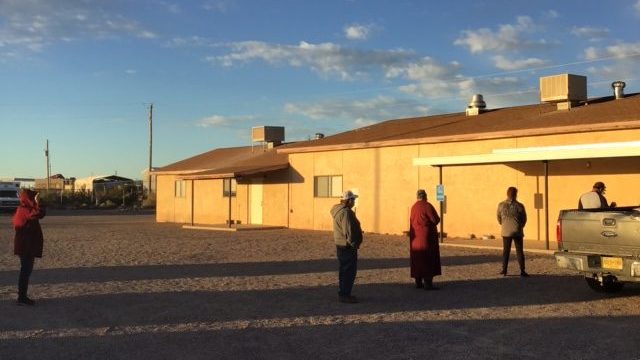 7 a.m. Lines were a rare sight throughout the day, but when the Elephant Butte polling place opened, 11 voters had queued outside. It took 20 minutes for the last person in the original line to be allowed to enter. Photograph by Diana Tittle
Photojournalism

At almost every polling place in the county, workers reported levels of activity ranging from “pretty slow” to “steady.” There were no known incidences of voter intimidation and even little evidence of last-minute politicking. Quiet was the adjective that springs to mind to describe the prevailing mood where ever the Sun’s roving band of photographers went, seeking to document voter turnout.

Election Day proceeded here at an unhurried pace for a good reason. The vast majority of New Mexicans expected to vote in the general election had already cast their ballots early or absentee. An examination of the total votes cast in all New Mexico House races by Nov. 2, conducted by the New Mexico House Democratic Campaign, revealed that only 10.5 percent of the expected statewide electorate had yet to vote.

Election Day may have begun with little drama, but it ended with a bang. Around 11 p.m. the county clerk posted unofficial election results showing Republican dominance of the total votes cast. To see Sierra County tallies for federal, state and local races and ballot issues, click here.