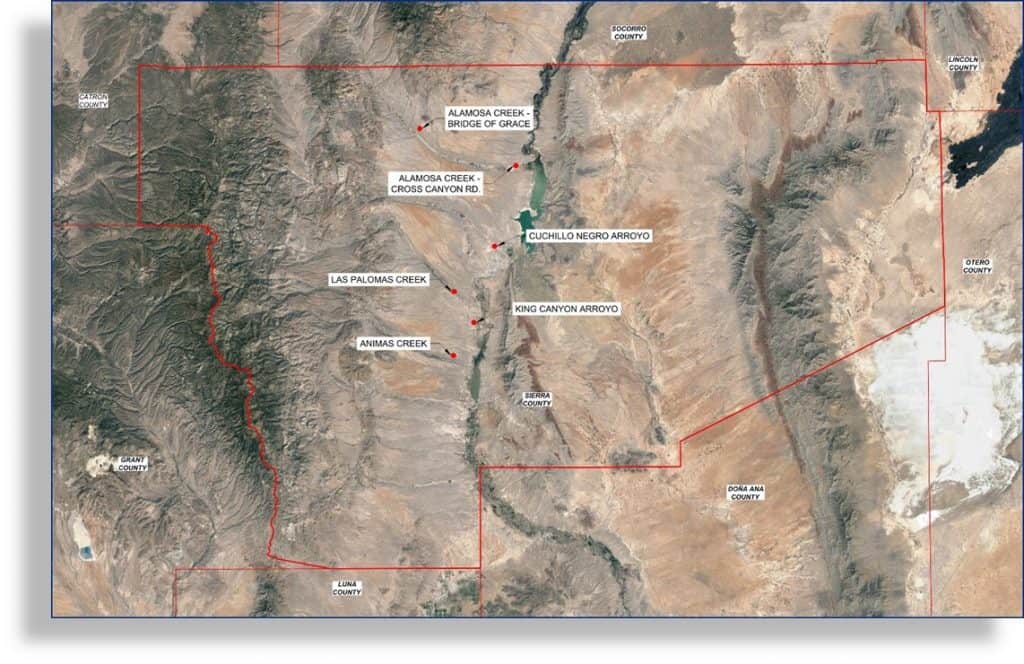 The six locations of the county's top priority flood control projects are indicated on this topographical map. Map courtesy of Wilson & Company

The Sierra County Commission approved the plan via resolution at the Dec. 15 meeting to satisfy granting agencies’ preference for funding projects detailed in engineering studies that have been formally endorsed by a governing body.

The master plan was totally funded by a state capital outlay grant, awarded in fiscal year 2018-2019, County Manager Bruce Swingle told the county commission. The county request for proposals to conduct the planning was awarded around November 2019 to Wilson & Company, a national firm, with engineers from the company’s Las Cruces office doing the work.

The commissioners had been briefed on the master plan at their Nov. 17 meeting by Wilson & Company Project Manager Eric Hamilton and Christie Soulsby, project engineer.

The first part of the master plan mapped the flow of flood waters through Sierra County from 53 water basins, some originating beyond the county’s boundaries. The second part of the master plan identifies the top six areas with the most population and the most flooding. Plans offering several alternatives for improving infrastructure and increasing runoff capacity were prepared for each of the six sites.

Wilson & Company’s Hamilton said the total cost for improvements at the six sites is about $11 million. Figures given in the company’s presentation for the six “preferred” alternatives—which were not the most costly options presented—add up to only about $6.5 million.

In an interview with the Sun, Hamilton said incorporated areas, such as Truth or Consequences and Elephant Butte, were excluded from the county’s top six sites. These incorporated areas can use the plan’s applicable maps of water basins to save money on preliminary engineering reports for their own drainage and flood control projects.

Improvement plans for the six major water-course sites will each be used in separate grant applications, Hamilton said. Granting agencies require engineering plans to be “updated every five years,” he noted. If the county doesn’t finish all six projects within that time, updating these plans “won’t cost much.”

At each of the six sites, the initial goal, Hamilton said, was to protect populations from 100-year storm events. Further investigation revealed that achieving this goal would not be financially feasible for some of the sites, since prohibitively expensive earthwork to change the water flow of arroyos up- and downstream would be required.

The site plans for the six major water courses, ranked in order of need and flooding risk, are as follows:

The “Alamosa Creek–Bridge of Grace” project is Sierra County’s top capital-outlay request in the upcoming legislative session. At a recent conclave of local and state representatives to discuss these requests, County Manager Swingle described the bridge “as the major ingress and egress point for Monticello.”

The current structure protects against two-year flood events, which have a 50 percent chance of occurring in any given year, so the road over the bridge frequently floods out, preventing travel.

The cost estimate is nearly $1 million.

The preferred alternative plan recommended by Wilson & Company would remove the existing structure and then install a crossing over three aluminum culverts that are one foot higher and much broader than the existing culverts. Protection from five-year flood events would be the result.

The estimated cost is about $2.85 million.

At the point where County Road AO07 crosses the Cuchillo Negro Arroyo there is no structure protecting against flooding, just a low-water crossing.

The preferred alternative plan proposes to line the arroyo’s south side with wire-enclosed riprap. It also proposes to build a culvert with two 72-inch culvert pipes to carry water under AO07. The result will be protection from 100-year storm events at the crossing.

The preferred alternative plan proposes to install two 36-inch reinforced-concrete pipes under the roadway. The result will be protection from 100-year storm events.

The banks of the creek are destabilizing where Animas Creek Road runs close to Animas Creek. The proposed plan would shore up the western bank with wire-enclosed riprap. The banks could then withstand a 10-year storm event.

TAGS: crises and controversies | infrastructure | water
Share this:
author
Kathleen Sloan is the Sun’s founder and chief reporter. She can be reached at kathleen.sloan@gmail.com or 575-297-4146.
DON’T MISS!