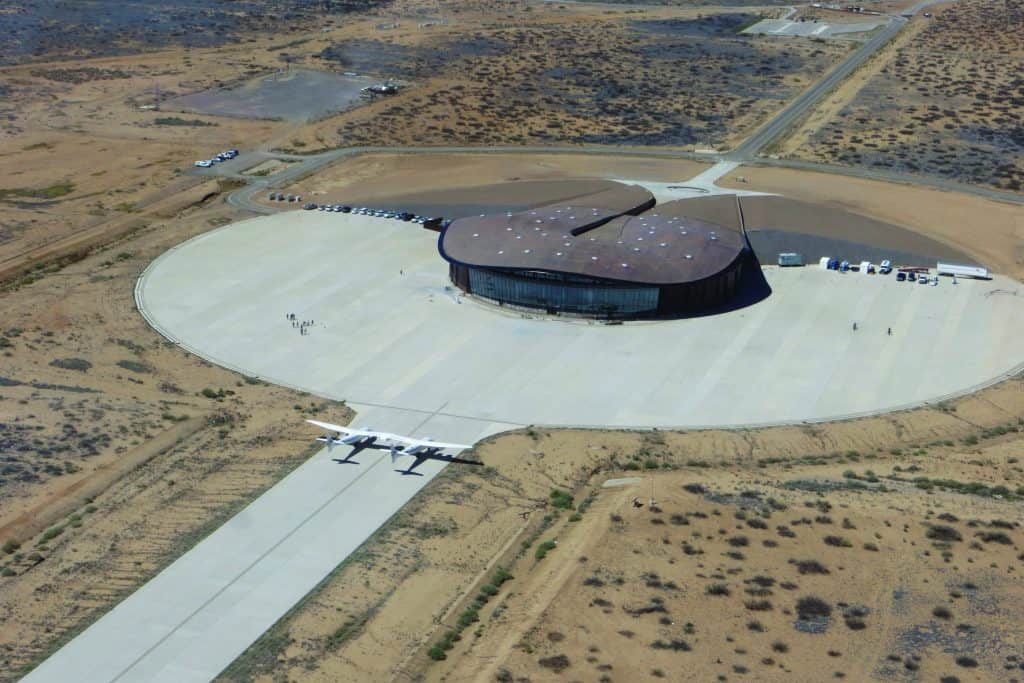 The Spaceport America "campus" (with Virgin Galactic's VMS Eve mothership on the tarmac) will be significantly expanded if the state grants the funding requests proposed in the Spaceport's latest five-year ICIP. Photograph by Virgin Galactic copyright © 2020

A year ago, the New Mexico Spaceport Authority asked for $37.5 million for 2021 infrastructure capital improvements. This year, NMSA is asking for zero ICIP funding for 2022.

The 2021-2025 ICIP and the 2022-2026 ICIP were submitted by NMSA Chief Executive Officer Dan Hicks before his termination on Oct. 16. Chief Financial Officer Zach DeGregorio also prepared and signed off on both ICIP submissions. DeGregorio resigned in June after submitting a complaint charging Hicks with financial mismanagement, according to New Mexico Department of Finance and Administration documents.

Because NMSA declines to answer personnel questions, it is not possible to determine if their departures have anything to do with the delay in pursuing capital projects this year. The coronavirus pandemic created uncertainty during the last legislative session, with the ICIP requests submitted by the Spaceport and many other governmental entities put on the back burner.

Every year governmental entities must submit a five-year Infrastructure Capital Improvements Plan to the DFA, which becomes the working document for legislators and state departments in considering funding.

• $500,000 to “refresh” the Spaceport’s eight-year-old information-technology equipment, which ICIP documents said had no backup.

• $2 million to design and build an “IT spaceport building,” because, as ICIP documents stated, it would be “unworkable” for IT equipment to be housed in the terminal once Virgin Galactic took up residence. An IT building close “to the entrance of the campus” would better serve all Spaceport operations. The cost of the building is $4 million, with $2 million in funding already identified, the ICIP document stated.

• $5 million to design and build a “visitors’ access control” facility

• $20 million to design and build a “visitors’ center.” Evidently the design done in 2012 by the Ideas Team of Orlando, FL, either needs to be updated or will not be used.

This year, according to DFA Public Information Officer Henry Valdez, “Spaceport America submitted a 2022-2026 ICIP request by the statutory deadline of July 1st 2020. However, there was no capital funding request for 2022. Therefore, they do not have a request this legislative session.”

• $20 million to design and build a “welcome center,” which is probably the aforementioned visitors’ center

• $10 million to complete the taxiway

• $10 million to design and build a “warehouse,” likely the aforementioned IT building

• $10 million to complete the warehouse

TAGS: finance
Share this:
author
Kathleen Sloan is the Sun’s founder and chief reporter. She can be reached at kathleen.sloan@gmail.com or 575-297-4146.
DON’T MISS!