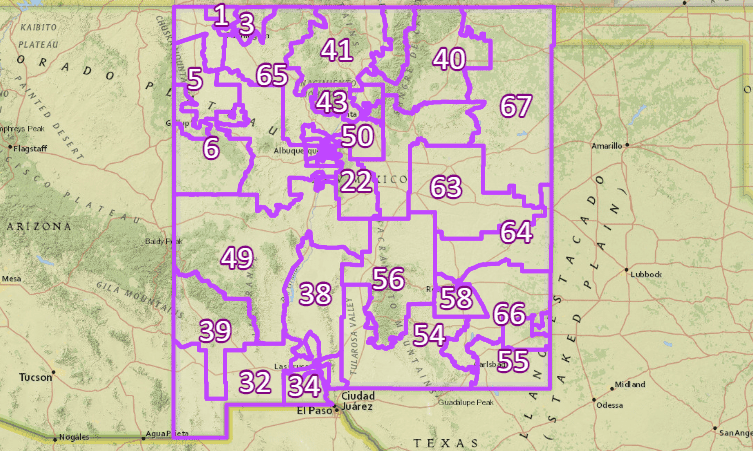 House Bill 8 proposes the adoption of this redistricting map redrawing the lines of the state's House of Representative districts. Source: NM Political Report

Editor’s Note: This article is reprinted with the permission of the NM Political Report, a not-for-profit news organization focused on promoting a greater public understanding of politics and policy in the state of New Mexico.

A bill to draw new lines for state House districts statewide passed two committees on Wednesday and is now headed to the House floor.

On Wednesday evening, HB 8 passed the House Judiciary Committee on a 7-4, party-line vote.

During the hearing, a number of representatives of sovereign nations, pueblos and tribes expressed their unified support for the map put forward by Daymon Ely (D-Corrales).

“This has not been an easy process trying to reach a consensus among sovereign governments,” Pueblo of Acoma Governor Brian Vallo said.

He and others said that Native governments worked for months to find a preferred map that would allow for representation in the legislature. And others said that the COVID-19 pandemic exacerbated chronic undercounting during the 2020 census, which explained why some districts had a lower number of residents than other districts, particularly those in northwestern New Mexico.

Republicans on the House State Government, Elections & Indian Affairs Committee had expressed concern over the “deviation” of the different districts, or how much each district differs from the ideal equal population. The maps presented to the legislature by the Citizens Redistricting Committee sought to keep districts at a 10 percent deviation (so no district would have five percent more than the ideal population and no district would have five percent less).

The proposal passed that committee on a party-line 6-3 vote.

Republicans, meanwhile, criticized the bill and Republicans asked Brian Sanderoff, an expert witness on the bill and the president of Research & Polling, Inc., whether he considered the map to be a gerrymander. Sanderoff has participated in the redistricting process for decades in New Mexico.

“I don’t see any legal gerrymander from these maps as to how I know the law,” Sanderoff said.

Matthew Reichbach is the editor of the NM Political Report. The former founder and editor of the NM Telegram, Matthew was also a co-founder of New Mexico FBIHOP with his brother and one of the original hires at the groundbreaking website, the New Mexico Independent. Matthew has covered events such as the Democratic National Convention and Netroots Nation and formerly published “The Morning Word,” a daily political news summary for NM Telegram and the Santa Fe Reporter.

“The primary purpose of social studies is to help young people develop the ability to make informed and reasoned decisions for the public good as citizens of a culturally diverse, democratic society in an interdependent world.”
—National Council for the Social Studies

Reader Michael L. Hayes of Las Cruces commented: What impresses me is that both the proposed standards and some of the criticisms of them are equally grotesque. I make this bold statement on the basis of my experience as a peripatetic high school and college English teacher for 45 years in many states with many students differing in race, religion, gender and socioeconomic background, and as a civic activist (PTA) in public education (My career, however, was as an independent consultant mainly in defense, energy and the environment.)

The proposed social studies standards are conceptually and instructionally flawed. For starters, a “performance standard” is not a standard at all; it is a task. Asking someone to explain something is not unlike asking someone to water the lawn. Nothing measures the performance, but without a measure, there is no standard. The teacher’s subjective judgment will be all that matters, and almost anything will count as satisfying a “performance standard,” even just trying. Students will be left to wonder “what is on the teacher’s mind?” or “have I sucked up enough.”

Four other quick criticisms of the performance standards. One, they are nearly unintelligible because they are written in jargon. PED’s use of jargon in a document intended for the public is worrisome. Bureaucrats often use jargon to confuse or conceal something uninformed, wrong or unworthy. As a result, most parents, some school board members and more than a few teachers do not understand them.

Three, many performance standards are simply unrealistic, especially at grade level. Under “Ethnic, Cultural and Identity Performance Standards”; then under “Diversity and Identity”; then under “Kindergarten,” one such standard is: “Identify how their family does things both the same as and different from how other people do things.” Do six-year-olds know how other people do things? Do they know whether these things are relevant to diversity and identity? Or another standard: “Describe their family history, culture, and past to current contributions of people in their main identity groups.” (A proficient writer would have hyphenated the compound adjective to avoid confusing the reader.) Do six-year-olds know so much about these things in relation to their “identity group”? Since teachers obviously do not teach them about these other people and have not taught them about these groups, why are these and similar items in the curriculum; or do teachers assign them to go home and collect this information?

Point four follows from “three”; some information relevant to some performance measures requires a disclosure of personal or family matters. The younger the students, the easier it is for teachers to invade their privacy and not only their privacy, but also the privacy of their parents or guardians, or neighbors, who may never be aware of these disclosures or not become aware of them until afterward. PED has no right to design a curriculum which requires teachers to ask students for information about themselves, parents or guardians, or neighbors, or puts teachers on the spot if the disclosures reveal criminal conduct. (Bill says Jeff’s father plays games in bed with his daughter. Lila says Angelo’s mother gives herself shots in the arm.) Since teacher-student communications have no legal protection to ensure privacy, those disclosures may become public accidentally or deliberately. The effect of these proposal standards is to turn New Mexico schools and teachers into investigative agents of the state and students into little informants or spies.

This PED proposal for social studies standards is a travesty of education despite its appeals to purportedly enlightened principles. It constitutes a clear and present danger to individual liberty and civil liberties. It should be repudiated; its development, investigated; its PED perpetrators, dismissed. No state curriculum should encourage or require the disclosure of private personal information.

I am equally outraged by the comments of some of T or C’s school board members: Christine LaFont and Julianne Stroup, two white Christian women, who belong to one of the larger minorities in America and assume white and Christian privileges. In different terms but for essentially the same reason, both oppose an education which includes lessons about historical events and trends, and social movements and developments, of other minorities. They object to the proposal for the new social studies standards because of its emphasis on individual and group identities not white or Christian. I am not going to reply with specific objections; they are too numerous and too pointed.

Ms. LaFont urges: “It’s better to address what’s similar with all Americans. It’s not good to differentiate.” Ms. Stroup adds: “Our country is not a racist country. We have to teach to respect each other. We have civil rights laws that protect everyone from discrimination. We need to teach civics, love and respect. We need to teach how to be color blind.”

Their desires for unity and homogeneity, and for mutual respect, are a contradiction and an impossibility. Aside from a shared citizenship, which implies acceptance of the Constitution, the rule of law and equality under the law, little else defines Americans. We are additionally defined by our race, religion, national origin, etc. So mutual respect requires individuals to respect others different from themselves. Disrespect desires blacks, Jews or Palestinians to assimilate or to suppress or conceal racial, religious or national origin aspects of their identity. The only people who want erasure of nonwhite, non-Christian, non-American origin aspects of identity are bigots. Ms. LaFont and Ms. Stroud want standards which, by stressing similarities and eliding differences, desire the erasure of such aspects. What they want will result in a social studies curriculum that enables white, Christian, native-born children to grow up to be bigots and all others to be their victims. This would be the academic equivalent of ethnic cleansing.

This postmortem of a case involving a 75-year-old women who went missing from her home in Hillsboro last September sheds light on the bounds of law enforcement’s capacity to respond, especially in large rural jurisdictions such as Sierra County, and underscores the critical role the public, as well as concerned family and friends, can play in assisting a missing person’s search.

Reader Jane Debrott of Hillsboro commented: Thank you for your article on the tragic loss of Betsey. I am a resident of Hillsboro, a friend of Rick and Betsey, and a member of H.E.L.P. The thing that most distresses me now, is the emphasis on Rick’s mis-naming of the color of their car. I fear that this fact will cause Rick to feel that if he had only gotten the facts right, Betsey may have been rescued before it was too late. The incident was a series of unavoidable events, out of everyone’s control, and we will never know what place the correct color of her car may have had in the outcome. It breaks my heart to think that Rick has had one more thing added to his “what ifs” concerning this incident.

Diana Tittle responded: Dear Jane, the Sun undertook this investigation at the request of a Hillsboro resident concerned about the town’s inability to mount a prompt, coordinated response to the disappearance of a neighbor. From the beginning, I shared your concern about how our findings might affect Betsy’s family and friends. After I completed my research and began writing, I weighed each detail I eventually chose to include against my desire to cause no pain and the public’s right to know about the strengths and limitations of law enforcement’s response and the public’s need to know about how to be of meaningful assistance.

There was information I withheld about the state police investigation and the recovery. But I decided to include the issue of the car’s color because the individuals who spotted Betsy’s car emphasized how its color had been key to their identification of it as the vehicle described in Betsy’s Silver Alert. Because the misinformation was corrected within a couple of hours, I also included in this story the following editorial comment meant to put the error in perspective: “The fact that law enforcement throughout the state was on the lookout in the crucial early hours after Betsy’s disappearance for an elderly woman driving a “light blue” instead of a “silver” Accord would, in retrospect, likely not have changed the outcome of the search” [emphasis added].

I would also point to the story’s overarching conclusion about the inadvisability of assigning blame for what happened: “In this case, a perfect storm of unfortunate circumstances, many of them beyond human control, hindered the search that it would fall to Hamilton’s department to lead.”

It is my hope that any pain caused by my reporting will eventually be outweighed by its contribution to a better community understanding of what it will take in the future to mount a successful missing person’s search in rural Sierra County.