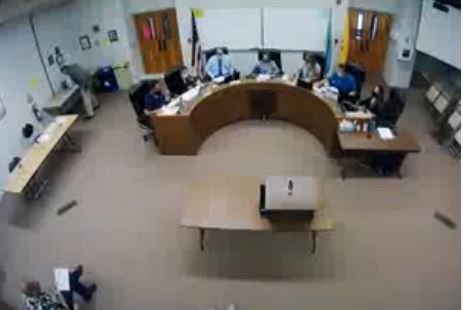 The murky and faraway video recordings of T or C commission meetings (from one of which this screen shot was taken) are emblematic of how public access to these decision-making proceedings has been reduced by pandemic precautions and abandonment of oral management reports.

The Sun asked each city commissioner when and how this new procedure was instituted and if it had gone to a public vote, but none responded.

The Sun also submitted an Inspection of Public Records Act request for the last four reports and received those from Oct. 16, Oct. 23 and Oct. 30. Madrid didn’t send a report to city commissioners on Oct. 9, City Clerk Angela Torres said.

Madrid’s written reports are as slim as the prior verbal reports he made during city commission meetings, but even the few details they contain are no longer made public.

The Oct. 30 report states the city declared a disaster after the “July 26 flood event.” “We prepared and submitted this Emergency Request to the State of New Mexico Office of Emergency Management (OEM),” Madrid’s report states. It doesn’t give the dollar amount of the request or when it was submitted. Madrid has said in past commission meetings the request was “under $750,000.”

“The OEM reviewed the request and forwarded it to the Governor’s Office for approval a few weeks ago. Neither the OEM, nor we, has received a response,” Madrid wrote.

State Representative Rebecca Dow has agreed “to intervene in order to get a status on the request,” Madrid stated.

Madrid is meeting with an unnamed person at Sierra Vista Hospital sometime this week, according to the Oct. 30 report. The Civic Center might have to be utilized “should the Hospital near its capacity. We will provide every accommodation possible. . . .”

In the Oct. 23 report, Madrid warns: “Covid cases are rising.” In response, he is “restricting access to city buildings” and declared that the Oct. 28 meeting would not be open to the public. The agenda was also “shortened,” he stated.

Despite the rise in cases, Madrid told commissioners in the Oct. 23 and the Oct. 16 reports that the utilities department is “now sending out cut-off notices.” Since March, the city had kept utilities on for those unable to pay. Payment plans are being considered, he stated.

The police department, also in reaction to the spike in COVID-19 cases, is enforcing the governor’s mask-wearing mandate at Walmart, Madrid said, as well as “other high-traffic areas.”

The Oct. 16 report announces: “Our next Commission meeting will likely not include public attendance. Measures are already in place to conduct meetings in compliance with all requirements.”

Madrid made the same claim at the Oct. 14 meeting. After the meeting, the Sun told Madrid the online audio is so bad that preventing physical attendance will essentially close the meeting. Madrid said no one had complained about the audio.

The Sun has been copied on letters from residents to Madrid and the city commission complaining about the poor audio quality of the city’s online meeting platforms and witnessed “chat box” comments to the same effect made online during meetings. The city’s response to these complaints was to cut off the public’s ability to use the chat function in online meetings.

Transparency about the details and costs of capital projects, always dim, will get worse as well. Madrid’s Oct. 16 report states he is preparing an “update” on capital projects, but it will be given to the city commission in writing, he said, “rather than in-person at the Commission meeting.”

Madrid was hired a year and 10 months ago. Capital projects have grown during his tenure from $4 million to $20 million, he reported, during the Aug. 26 meeting. That meeting, described as a retreat by Mayor Sandra Whitehead at the time, was held 45 miles out of town. It was a yearly “tradition,” Whitehead said in explaining why the board’s sole planning session is conducted far from the public eye.

TAGS: policies & practices
Share this:
author
Kathleen Sloan is the Sun’s founder and chief reporter. She can be reached at kathleen.sloan@gmail.com or 575-297-4146.
DON’T MISS!