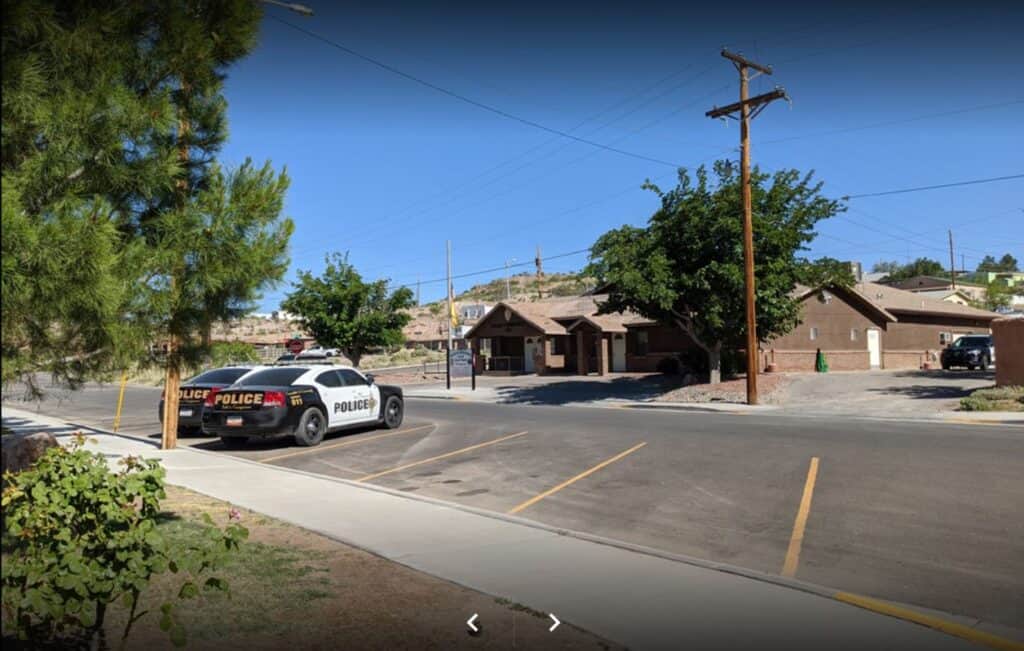 T or C police headquarters: Should the city commission's authority to approve or veto law enforcement policies be repealed? Photograph by Deserted Dave/Google

Municipal code gives the Truth or Consequences city commission oversight authority over police policy and police conduct, a check and balance some would deem good to have in place in a post-George Floyd world.

Commissioner Randall Aragon, who was formerly T or C’s chief of police, questioned the wisdom of that code and suggested it needs to be repealed at the last city commission meeting.

During the May 26 session commissioners also approved a new taser policy, were briefed on the selection process for the new police chief and discussed in closed session possible litigation involving two police officers.

Referring to the commission’s authority to approve or veto T or C’s law enforcement policies, Commissioner Aragon said: “I have never seen it done in my 29 years of experience [as a police officer and chief of police in various U.S. cities].” “We should not be micromanaging by approving police department rules and procedures or for any other department, for that matter.”

Aragon headed the police department here from July 2018 to September 2019, when he was dismissed by previous City Manager Morris Madrid for reasons never made public.

While chief, Aragon said he discussed repealing the code with City Attorney Jaime “Jay” Rubin, who, Aragon said, had agreed with him. “Remember that?” Aragon asked.

“I did agree with you,” Attorney Rubin said, suggesting the local law should be reviewed “in the future.”

Aragon requested that Rubin research whether “other cities” give such authority to their commissioners. He acknowledged that repealing the code was not the most pressing item on the commission’s to-do list. “We have other things to work on,” he said.

The city code in question is:

Chapter 10, Section 10-4: The Chief of the Police Department may make or prescribe such rules and regulations as he shall deem advisable. Such rules, when approved by the Governing Body [i.e., the city commission], shall be binding on such members. Such rules and regulations may cover, besides the conduct of the members, uniforms and equipment to be worn or carried, hours of service, vacations, and all other similar matters necessary or desirable for the better efficiency of the Department.

The issue of whether the city commission appropriately has police oversight came up after Deputy Chief of Police Erica Baker—acting as chief since Mike Apodaca retired about a month ago—presented a proposed change to the department policy on tasers, which she said are now termed “conductive energy weapons.”

The old taser policy was not included in the agenda packet. Baker handed hard copies to city commissioners on the dais before her presentation, “so you can compare it to the new policy.”

The old policy had to be changed in part because of changes in technology and terminology, Baker said.

It was “vague” and “left a lot of gray area” open to an officer’s interpretation, Baker told the Sun on May 27, the day after the commission meeting. The new policy clarifies what constitutes proper use of a CEW. “I wanted it to be detailed, so there would be no room for questioning,” the deputy chief said.

The weapon’s use to correct unruly but non-threatening behavior is now prohibited. “Before 2011, when I joined the city police department,” Baker said during the Sun’s interview, tasers were “used punitively.” She recalled an incident in which an officer repeatedly tasered an elderly man handcuffed to a wheelchair because he had verbally abused hospital staff as he awaited examination.

“It is only to be used if severe injury from a subject is possible,” Baker told the city commission. “It is never to be used as a punitive measure.”

The old taser policy allowed officers to “push the weapon against the subject’s body,” while activating the electric charge, “which I strongly do not recommend,” Baker said to the commissioners. Only if the CEW’s pronged electric cables, which are about 15 feet long, “get tangled up,” leaving an officer vulnerable, may the officer press the CEW head directly on the subject’s body.

With no further discussion, the city commission unanimously approved the new CEW policy.

The Sun called officials with Silver City and Tucumcari to inquire if their city councils approve city police department rules and procedures.

Silver City Personnel Officer Celia Dominguez said the city council does not, but the city manager must approve policies before they are instituted.

Tucumcari Chief of Police David Laphrom expressed opposition to authorizing city councils to approve police policies. “They are not qualified,” he said. “If you need a contract drawn up, you don’t tell a lawyer how to do it.”

To ensure that any new policies that he drafts can withstand legal scrutiny, Laphrom said he researches model policies offered by national police organizations and the American Civil Liberties Union, as well as reviewing pertinent appellate and supreme court decisions.

The Cato Institute, a 40-year-old public policy think tank whose mission is to “advance solutions based on the principal of individual liberty, limited government, free markets and peace,” has written many position papers on police practices.

Clark Neily, Cato’s senior vice president for legal studies, spoke with the Sun on May 28.

Asked if the city commission should approve police policies, Deputy Chief Erica Baker said: “I really don’t have an opinion on it. I think it’s good to keep them informed about what is going on.”

City Manager Bruce Swingle informed the city commission during the “reports” section of the May 26 meeting how the new chief of police will be selected.

Swingle said he has assembled a selection committee whose members include past City Commissioner Rolf Hechler, who has law enforcement experience; Assistant District Attorney Virginia Hicks; and State Police Captain Robert Alguire. Swingle, who was once a sheriff’s deputy, will also serve on the committee.

T or C has received applications from nine candidates, Swingle said, and the selection committee has narrowed the pool to four contenders, who have been asked to answer in writing questions designed to probe their “command level leadership” experience and philosophy, as well as their opinions on community policing.

“We will do virtual interviews next week,” Swingle said, adding that he would report on the top candidate at the next commission meeting.

City code gives the city manager the authority to hire and fire the chief of police:

The agenda for the closed-session portion of the May 26 commission meeting included discussion of the following item:

The details provided represent an increase in transparency compared to closed-session agenda items presented for public information during the past two years the Sun has covered city commission meetings. Until now, the agenda merely stated the Open Meetings Act statute number and title without providing specifics of who or what.

TAGS: law | law enforcement
author
Kathleen Sloan is the Sun’s founder and chief reporter. She can be reached at kathleen.sloan@gmail.com or 575-297-4146.
Share this:
HAVE YOU SEEN?