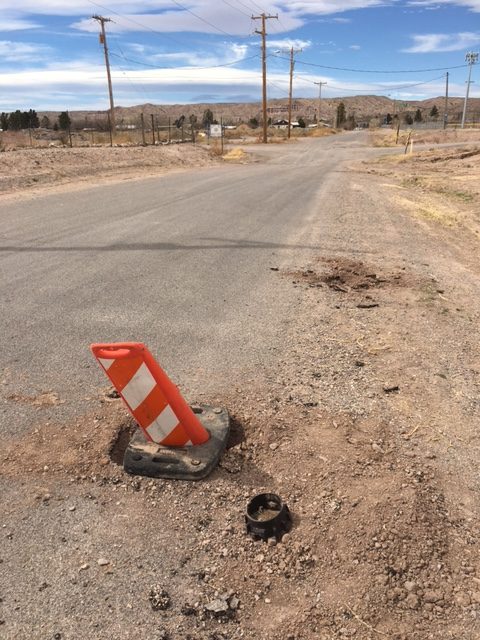 In the last five weeks the City of Truth or Consequences’s water system has experienced six water-main breaks, including one that occurred just last night on Veater Street between Iron and Radium Streets.

The frequency of the breaks has escalated over the last 14 months, during which, all told, there were 18 water-main-break events in town and/or in Williamsburg, whose water lines are owned by T or C. Some events were actually clusters of breaks, seemingly occurring in a domino effect.

Deputy Chief of Police Erica Baker has posted alerts about water-main breaks on the city’s Facebook page since she became public information officer in December 2019. These notices are the only documentation available of the breaks. They may not, however, record every break that has taken place in the last 14 months, nor do they usually provide detailed accounts.

The Sierra County Sun submitted on Jan. 11 an Inspection of Public Records Act request, asking for documents recording the breaks, funds used to pay for repairs and the amount of water lost during the events. “These documents do not exist,” was the city’s response on Jan. 26.

The inconvenience and possible health consequences suffered by residents left without water for hours are also incalculable.

Feb. 23, 2021: several water-main breaks in southwest T or C and Williamsburg on South Broadway Avenue at Good 2 Go and Southwest Signs and at the intersections of Cook and Hyde Streets and Cook Street and Henson Avenue

WHAT SECTIONS OF TOWN HAVE BEEN HARDEST HIT?

PIO Baker’s notices of water-main breaks specify about 24 locations. Nine were near or on Veater Street in southwest T or C or Williamsburg.

The area with the second most breaks was downtown T or C, with five water-main breaks. Three of them occurred Aug. 13, 2020.

The area with the third most breaks was east T or C, with four water-main breaks off of or on 3rd Street and Riverside Drive. 8th and Corbett also experienced a water-main break.

The area with the fourth most breaks was west T or C. It experienced three water-main break events at Cook Street, Morgan Street and Hyde Street. Various side streets were also listed as among the affected locations.

The city may have already run through its “emergency repairs” budget item. The agenda for tomorrow’s March 10 city commission meeting includes a “justification” of a nearly $49,000 emergency procurement of services performed by New Mexico Tap Master of Albuquerque on “recent waterline breaks.” The meeting packet, which can be reviewed on the city’s website, details that the emergency work included two 12-inch “SS linestop sleeves,” two machines to blow the sleeves into pipes, $750 per day per machine to “hold” the line, mobilization charges and emergency freight charges.

Jesse Cole, the city’s water and wastewater director, who has declined to speak with the Sun about the condition of the city’s southern well field (see Related article below), will give a report on the Feb. 23 water-main breaks, as well as on “other water concerns” during tomorrow’s meeting.

TAGS: infrastructure | utilities | water
author
Kathleen Sloan is the Sun’s founder and chief reporter. She can be reached at kathleen.sloan@gmail.com or 575-297-4146.
Share this:
HAVE YOU SEEN?

The director's candid remark about the need for a new well to be built on the northside of town to provide "redundancy" launched a Sun...

City’s water rates must go up to get $9.4 million loan/grant

​Water rates will have to go up 35 percent or more if the City of Truth or Consequences wants to keep a $9.4-million loan-grant from…