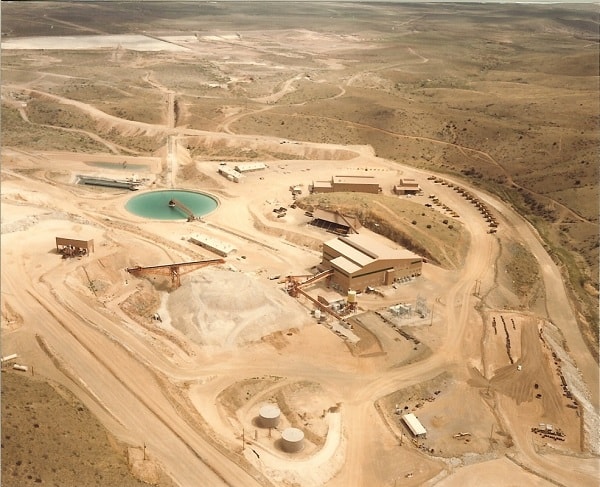 Aerial view of Copper Flat Mine circa 1982. To restart even a minimal mining operation, the New Mexico Copper Corporation must validate rights to at least 3,800 acre-feet per year. Source: NMCC

The dispute over the proposed reopening of Copper Flat Mine off Highway 152 between Caballo and Hillsboro that has been raging for a decade will again be taken up in court. The New Mexico Court of Appeals in Santa Fe will hear opening oral arguments on April 1 at 10 a.m. on how much, if any, acre-feet the mine can rightfully claim.

The New Mexico Copper Corporation acquired Copper Flat, an open-pit mine abandoned after only a few months of operation in the 1980s, in 2011. To begin minimal copper-mining operations, NMCC must hold the rights to pump about 3,800 acre-feet of ground water a year. To maximize production, it will need to withdraw about 6,100 afy (acre-feet per year). Operations are projected to last for 10 to 12 years before the mine’s copper-porphyry deposits are depleted.

NMCC’s claim that it had acquired 10,000 afy was contested in the Adjudication Court for the Lower Rio Grande Basin in 2014. Fifteen Hillsboro residents, Turner Ranch Properties (whose Ladder Ranch abuts Copper Flat Mine), the New Mexico Pecan Growers and the Hillsboro Mutual Domestic Water Consumers Association joined with the Office of the State Engineer to question the validity of the claimed rights.

The battle over what was in Sierra County’s best economic interests was now officially joined.

The Sierra County Commission and the Truth or Consequences City Commission had passed resolutions of support for the mine in 2012 because it promised to create hundreds of good-paying jobs, however short-lived. (T or C withdrew its support in 2015, around the time NMCC cut a deal with the Jicarilla Apache Nation in northwestern New Mexico to lease 3,000 afy in exchange for giving hiring preference to tribal members. The county commission reaffirmed its faith in the project’s economic development potential in a 2019 resolution.)

Grass-roots opponents pointed out that public and private investments in roads, businesses and services created and maintained to support the mine’s operations and employees would be undermined if Copper Flat repeatedly opened and closed due to fluctuations in the price of copper; they might be lost altogether when the mine closed.

The Hillsboro and other claimants’ joint motion to the Adjudication Court was prompted by an even more profound concern. If NMCC’s water right claims were upheld, it would pave the way for the largest annual withdrawal of ground water in Sierra County. The water the mine intended to pump each year from its well field along Highway 152 above Animas Creek far exceeded the annual consumption of Truth or Consequences and Elephant Butte combined. The claimants feared Hillsboro’s water system, as well as hundreds of private wells supplying homes, ranches and farms along Animas Creek, could be severely impacted. They also recognized that the mine’s plans to store after-mining wastewater in a huge lagoon behind an earthworks dam posed a long-term threat to the quality of the ground water throughout the county and beyond. To add insult to injury, any water rights NMCC held would depart the county with it after mining operations ended, hampering future development.

After four years of court proceedings, the Adjudication Court ruled in February 2018 that NMCC had rights to about 900 afy.

A panel of three Court of Appeals judges—Richard Bosson, Michael Bustamante and J. Miles Hanisee—will determine whether the Adjudication Court’s ruling should be upheld. But this decision is not likely to end the dispute. If the Court of Appeals invalidates the mine’s rights altogether or upholds its rights only to 900 afy, NMCC may have other means of securing the minimum afy it needs to reopen the mine.

In 2020, NMCC leased water rights sufficient to start minimal operations from an investment group with land holdings in Santa Theresa, New Mexico. The company has applied to the Office of the State Engineer to transfer those rights to its wells along Highway 152.

The transfer has been protested by over 50 neighboring water users as detrimental to their wells. The local protestants have been joined by the Interstate Stream Commission on behalf of the state’s responsibility for river water; the Elephant Butte Irrigation District on behalf of the farmers of southern New Mexico; the Rio Grande Compact Commission on behalf of the state’s agreement with Texas and Mexico to deliver water according to the interstate compact; the Camino Real Regional Utility Authority and other entities in Sunland Park and Santa Teresa that fear the loss of water needed for borderland development; and the Rio Grande Chapter of the Sierra Club, which is concerned about the environmental and biodiversity losses in the Copper Flat area and along the river that could be caused by NMCC’s mining.

OSE’s scheduling of a public hearing on the transfer is still pending.

The central issue before the Adjudication Court and the upcoming Court of Appeals case is New Mexico water law: that is, whether water rights unused for over 30 years are still valid, or whether unused water rights must return to the people of New Mexico to be available for other purposes, as specified in the New Mexico Constitution.

In contrast, the administrative hearing on the protested transfer of water rights will be decided on the hydrology of the area. The two sides will have to show whether NMCC’s pumping from their production wells will or will not significantly reduce water which the protestants have the right to use. The protestants are currently raising monies to retain the services of a hydrologist.

The needed mining permits depend on these water rights determinations. NMCC has obtained provisional approval from the U.S Bureau of Land Management for its mining plan, contingent on finding sufficient water. The State of New Mexico has not granted NMCC permission to proceed with mining, holding the company responsible for meeting the same provisions on which the BLM conditioned its permit.

When asked last year how long NMCC can take to acquire sufficient water rights to operate, Jerry Schoeppner, mining and minerals director of the state’s Energy, Minerals and Natural Resources Department, responded in an email: “There is no deadline by either statute or regulation for NM Copper Corporation to acquire the water rights. However, under the NM Mining Act the agency has discretion to deny an application in the event that the applicant is unable to proceed after reasonable notice of the intent to deny. Any such denial could be appealed by the applicant to the Mining Commission.”

In summary, the future of the Copper Flat Mine remains cloudy. NMCC is a wholly owned subsidiary of the Canadian-based Themac Resources Group, which is controlled by a wealthy Australian family. The Maloneys have poured an estimated $80 million into the project to date. The opposition is equally committed to fight it out on as many fronts as are still open, for as long as it takes to achieve a decisive verdict.

Daniel Lorimier is a 45-year resident of Sierra County. He served as the state lobbyist for the Rio Grande Chapter of the Sierra Club for 14 years, working to advance the Sierra Club’s environmental priorities every legislative session from 2005 to 2018. Dan lived in Santa Fe during the sessions and returned home to Sierra County the rest of the year.