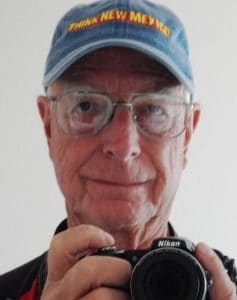 Ron Fenn developed a passion for photography in high school in Connecticut and an interest in film from a stint during his teenage years as a schoolwide classroom projectionist. At the University of Connecticut, he was involved in film making and the technical arts of theater. But photography has been a lifelong sub-career.

In the 1960s, Fenn was a staff photographer with Accident Legal Photo in Hartford, CT, shooting, developing and printing evidentiary photos for use in civil litigation. Working in medium format and 35mm, he delved into fine art photography and exhibited in a gallery in Litchfield County, CT. He spent several years in a specialty retail and commercial photo business in Hartford, before moving on to other endeavors.

Since retiring to Truth or Consequences in 2000, Fenn has volunteered as a videographer at city commission meetings and civic events, many of which aired on the late-lamented “TV for TorC” community broadcast station. He was the first projectionist at the reopened El Cortez Theater in the era before digital technology replaced reels of film. Volunteering to work for the Sun as a photojournalist is a natural progression for Fenn and a means to continue fulfilling Sierra County’s need for accurate news and information of local public interest.