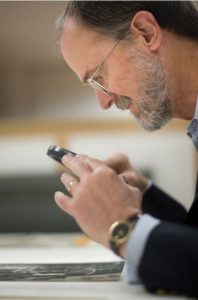 Editor, Photograph of the Week

Born in Henderson Texas, Hinson earned undergraduate degrees in art history and architectural studies from the University of Texas at Austin and a master’s degree in art history from Case Western Reserve University in Cleveland. His interest in photography seriously began in 1973, when he joined the CMA staff. Acquiring some of the institution’s initial photographs, he expanded the collection to more than 3,000 images covering the history of fine art photography from the medium’s invention in 1839 to the present. By the time of his retirement in 2010, Hinson had also personally organized about 100 small exhibitions of contemporary fine art photography by artists from around the world.

Asked once to explain his devotion to medium, he responded simply, “It was a love affair almost at first sight.”