Editor’s Note: This is the inaugural column by the Sun’s Reader at Large, a.k.a. David Goodman, who dedicates his leisure to reading voraciously and eclectically about politics, government, society, culture and literature. Every two weeks or so, the Sun will post for your pleasure and edification the Reader’s digest (pun intended) of some of the best and most thought-provoking articles, books and podcasts that Goodman has recently enjoyed. Please note that the italicized text is quoted and that some of the linked articles may be in publications that impose a pay wall. Neither the Sierra County Sun nor the Reader at Large endorses all the views expressed in the featured books and articles.

“A Swim in a Pond in the Rain” by George Saunders

From the New York Times review by Parul Sehgal, “George Saunders Conducts a Cheery Class on Fiction’s Possibilities”
He offers one of the most accurate and beautiful depictions of what it is like to be inside the mind of the writer that I’ve ever read—that state of heightened alertness, lightning-quick decisions. 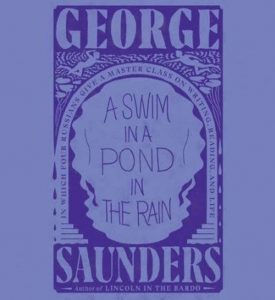 From the book
Essentially, the whole [story-writing] process is: intuition plus iteration.

You don’t need an idea to start a story. You just need, a sentence. Where does that sentence come from? Wherever. It doesn’t have to be anything special. It will become something special over time, as you keep reacting to it. Reacting to that sentence, then changing it, hoping to divest it of some of its ordinariness or sloth, is . . . writing.

“On Being with Krista Tippett” podcast (3/25/21), “The Vitality of Ordinary Things” featured an interview with the beloved Irish poet Michael Longley.
For me, it’s quite an extraordinary gift to see something beautiful—say, like a lark or a flower—and to write about it. For me, no experience is complete, really, until I’ve written about it. And that’s extraordinary. And it’s a way of having more than one life.

“Survival Is a Style” by Christian Wiman

From “I Don’t Want to Be a Spice Store”
I want to be the one store that’s open all night /and has nothing but necessities. /Something to get a fire going /and something to put one out.

New York Times (NYT) column (3/29/21): “The Fight Against Misinformation Isn’t Just on Facebook” by Nicholas A. Ashford
Government proposals to reform Section 230 or break technology companies into several smaller companies will not solve the misinformation problem. But increased fact-checking by independent bodies and mandates to present more reliable perspectives will help. Because of the reinforcing influence one medium has on another, reforms must include both the platform and broadcast industries.

Procedures for Allegations of Sexual Assault on Campuses

Washington Post (WP) editorial (3/28/21): “Opinion: Biden has a chance to restore balance to the rules on campus sexual assault”
Mr. Biden now seems poised to undo regulations that govern how allegations of campus sexual assault are handled. But unlike the Trump’s administration’s harmful policies on the environment and immigration, there are some things worth saving in these educational rules — and so the administration should tread carefully.

Guardian column (3/28/21): “Republicans have taken up the politics of bigotry, putting US democracy at risk” by Robert Reich
The party that once championed lower taxes, smaller government, states’ rights and a strong national defense now has more in common with anti-democratic regimes and racist-nationalist political movements around the world than with America’s avowed ideals of democracy, rule of law and human rights.

WP column (3/30/21): “The Birx dilemma is a lesson for the ages” by Matt Bai
And the larger lesson here—as though we should have to learn it again—is that appeasement never works. It doesn’t work for nations facing down aggressors. It doesn’t work for a political party that’s been taken over by a nativist bully. And it doesn’t work when you’re serving a president who demands unyielding loyalty and a willful disregard for the truth.

NYT column (3/30/21): “Republicans Have an Ambitious Agenda for the Supreme Court” by Ian Millhiser

Yet while the party appears to have no legislative agenda, it’s a mistake to conclude that it has no policy agenda. Because Republicans do: They have an extraordinarily ambitious agenda to roll back voting rights, to strip the government of much of its power to regulate, to give broad legal immunity to religious conservatives and to immunize many businesses from a wide range of laws. It’s just that the Republican Party doesn’t plan to pass its agenda through either one of the elected branches. Its agenda lives in the judiciary—and especially in the Supreme Court.

ProPublica column (3/25/21): “Why There’s So Much Investigative Journalism About Utility Companies” by Stephen Engelberg
Regulatory capture is ubiquitous in the arcane universe of utility oversight.

“On the Media” podcast (3/25/21): “Corruption at the Highest Levels, Exposed”
In 2015, a tragedy gripped Romanian consciousness when a fire at a popular club in the country’s capital killed 27 people, injured nearly 200 more, and sparked national protests about corruption.  . . . In 2019, filmmaker Alexander Nanau wrote, produced and directed the film “Collective,” chronicling this saga. Last year, the film was released in the U.S., and, this month, it received two Academy Award nominations. In this podcast extra, Nanau speaks with Brooke about why he decided to follow the story, how the pieces fell into place, and how this single story changed Romania’s relationship with the press—possibly for good.

David Goodman is the Sun’s Reader at Large. A lifelong Clevelander, he cannot recall when reading was not his passion. Now retired, the former public finance attorney devotes his mornings to reading. In the afternoons, he reads whenever he can. He also enjoys bedtime reading.