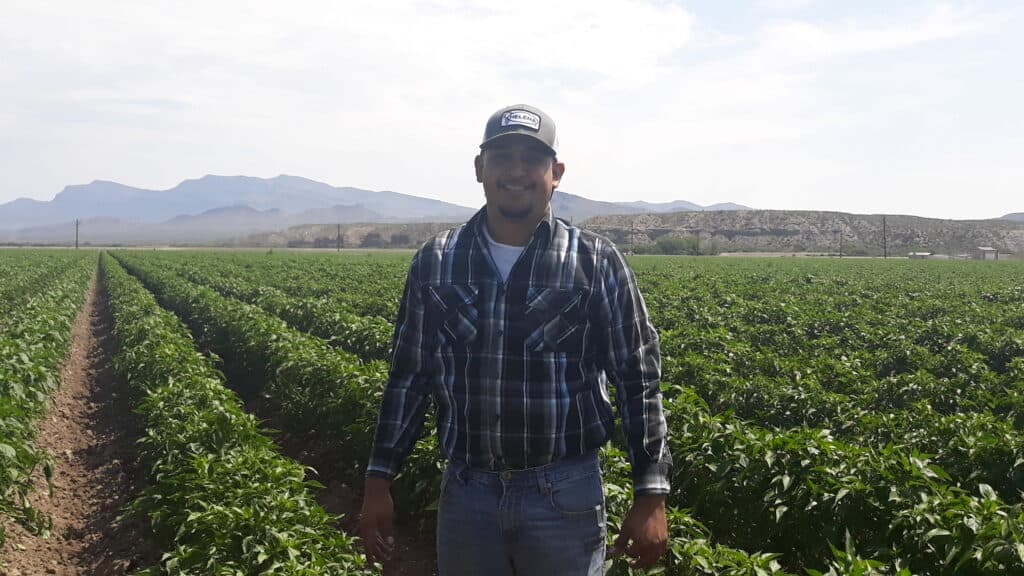 Marcelo Melendez III teams with his father to farm 250 acres in Arrey. Because of increasing summer temperatures, they have stopped growing corn and are focussing more on chili.
Photojournalism

Farming “for as long as I can”

The drought has made this farming season busier for Marcelo Melendez III.

Melendez works with his father, Marcelo Melendez Jr., who owns about 250 acres of land in Arrey in southern Sierra County. Melendez said they also have two full-time employees helping with crops and the occasional part timers for tasks like pulling weeds.

The U.S. Bureau of Reclamation reported that, as of July, Elephant Butte Lake was at 7 percent capacity, which is about 135,000 acre feet of water out of the 2.1 million acres the reservoir can hold. For the last several years there has not been enough water in the lake to accommodate a normal release over several months of three or four feet of water per acre to Elephant Butte Irrigation District farmers like the Melendezes. This year EBID shortened the irrigation season to 30 days and was able to make only four inches of water per acre available to its member farmers.

“While the water from EBID is nice, you can’t just plant chili for only a month. The plants will die right after that month from the heat,” Melendez said. “Farmers used to get their water from EBID by February until the fall. It rained a lot more. Back then, my dad didn’t need to use the wells he owned.”

The Melendezes have seven wells sprawled across their land, drilling and pumping for groundwater and sending it to their fields of chilis and hay and pecan trees. Those wells were an alternative supply of water to grow their crops. Melendez said the farm now relies more heavily on uses groundwater, which is stored under the surface of the land in aquifers.

Melendez explained he and his father traditionally used flood irrigation, which is water that is delivered to a field and flows over the ground. This year, however, they implemented their first drip irrigation system, which waters crops by sending water directly to the roots of plants. The drip system is set up on 30 percent of their farmland to save water and minimize part-time labor.

When working with flood irrigation, the Melendezes had to rebuild the borders and hire someone to regrade their fields after the irrigating the crop. “With drip, the labor is just me and my dad. We can leave the machine for about 12 hours, then just turn it off once we’re finished,” Melendez said.

Because the drip system is new, Melendez said that it is too soon to say whether this methodology will be more profitable than flood irrigation. He explained that, even though drip does not have the maintenance issues associated with flooding, it requires electricity, a new expense.

He explained for small farmers, any additional expense beyond maintenance and repairs of farming equipment heavily effects the overall profit of the season.

“If we lose a pump during the drought, we need to pay someone to fix it right away. The repairs could cost up to $15,000, depending on how bad the condition of the well is,” Melendez said.

Groundwater has the problem of being too salty compared to reservoir water, Melendez said. “The amount of salt in the water that we pump can kill the crops.” He explained that losing a crop means there is no way to recoup the cost of fertilizer, seeds and labor. “I’ve seen it happen to other farmers,” Melendez said. “Thank God we haven’t had that situation.”

The Melendezes have had to abandon growing corn because of excessive summer temperatures. To grow their chili crops, Melendez estimated that they must pump about 500 gallons of groundwater per minute for 12 hours daily, which is a total of about 360,000 gallons. Melendez stated the plants are watered daily until about September, depending on precipitation.

Groundwater isn’t viable forever, as aquifers can run out and take years to properly replenish, depending on how often it rains or snows. Melendez said a farmer’s business can be ruined if their wells run dry. To stay in business, a farmer would need to find another part of their land with a suitable aquifer and invest in drilling a new well. For farmers who do not have deep pockets, that’s almost impossible, he said.

“Installing another drill can cost as much as $80,000,” Melendez said. “If our wells stop working in the middle of the season, we will need to immediately find another water source for the chili, but we would be destroying our profit with the new installation.”

When asked his reliance on groundwater that may someday become exhausted if the present drought persists, Melendez said he sees it as an issue, but something that can’t be fixed by farmers. “[The drought] is out of our control. We don’t like pumping [as much] water and we wish we had more water from [EBID],” he said.

No matter how large or small their allotment of irrigation water, EBID member farmers are required to pay the same annual fees. “I just think it would be nice if [EBID] helped the farmers a little bit,” Melendez said. “They’re not giving us a lot of water, they should discount [the fee] a little bit.”

When asked about his vision of his future, with the climate warming and drought likely to continue to be a problem, Melendez acknowledged the issues, but stated farming is his passion. He would also like to keep growing the business, so that it can continue to provide for his family and his two full-time employees.

“I will be a farmer for as long as I can. I don’t plan on retiring from the business. If I’m 50 years old and I can still find a way to make a living off farming, I’ll keep going,” Melendez said. “My dad is not looking to retire anytime soon, and we’re going to keep being a team for a long time.”

Luis Rios is the Sun’s summer intern. This is his final article, as he will soon enter his senior year at New Mexico State University, where he is majoring in journalism.