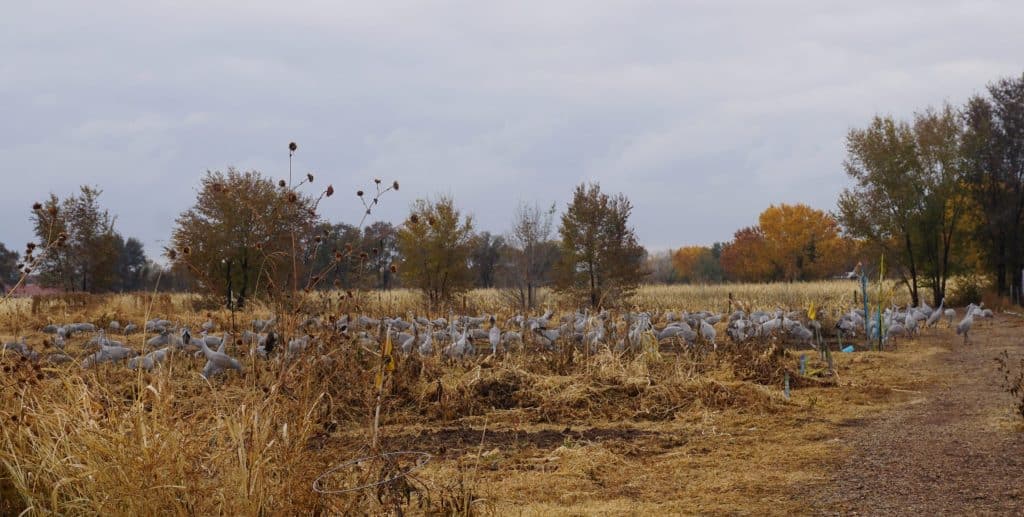 Sandhill cranes grazing in a field at Albuquerque's Los Poblanos Open Space, an inviting habitat that could be duplicated here Photograph by Andrew Potter
Photojournalism

Southern New Mexico’s fall and winter months offer a sunny and relatively warm climate compared to many areas to our north. Because of this, we begin to notice out-of-state license plates and RVs flocking to Sierra County to enjoy the plentiful sun, sights and soothing hot springs—the snowbirds have arrived!

This is also the time of year that another bird—the sandhill crane—follows a similar track to return to its winter home. The Rio Grande Valley is a major pathway along the annual migration of this determined bird—a migration which spans the distance between Siberia and the Gulf of Mexico.

Sandhill cranes can be found throughout North America. Cranes are constantly on the move and rarely stay in one place for long. They fly daily from feeding sites to roosts, and they travel seasonally between summer breeding and wintering areas. Sandhill cranes arrive in New Mexico in October and stay through February. They follow the availability of food and suitable roosting sites, as dictated by the seasons and local conditions.

Historically, sandhill cranes have thrived on native plants and animals along the Rio Grande. There was once abundant native habitat along the river to feed and sustain hundreds of thousands of cranes on their journeys. However, alterations to this habitat by urbanization and agricultural conversion have forced the cranes into smaller and smaller patches of suitable land.

The Rio Grande, like all rivers, was once wild. It flowed freely from the San Juan Mountains of southwestern Colorado to the Gulf of Mexico. Without dams and lakes impounding its waters, the river created habitats much different from those we see today. Seasonal flooding maintained wetlands and islands along the Rio Grande that were home to abundant native plants capable of supporting crane populations.

In Sierra County, the Rio Grande has been channelized between two dam-controlled reservoir lakes: Elephant Butte in the north and Caballo in the south. The dams regulate the irrigation water downstream in the Mesilla Valley and further south. As a result, the wetland habitat and bosque along our stretch of the river have largely disappeared. Agriculture and grazing now predominate.

The birds have been affected by the disappearance of their natural habitat. Flocks of cranes can be seen flying and circling overhead, searching for the right place to land. They find few.

Luckily, cranes draw attention wherever they go, and thanks to friendly humans have found areas along the Rio Grande in southern and central New Mexico in which to thrive, giving us a much-appreciated glimpse into their wild and natural world.

Sandhill cranes are not rare, but they remain a favorite among casual observers and bird watchers alike. Seeing a bird with a six-foot wingspan up close can be a memorable experience. Every November (except this year), thousands of people from across the globe attend the annual Festival of the Cranes at the Bosque del Apache National Wildlife Refuge, attracted by the cranes’ formidable size, impressive looks and gregarious behavior.

The BDA refuge is just that: a place that provides habitat for plants and animals that would otherwise have no place along the river. The refuge controls the flow of water and plants and manages fields of seed crops to provide both feeding grounds and safe roosting sites for cranes and many other species. Without this managed habitat there would be far fewer sandhill cranes wintering in New Mexico.

In October of 2019 I spent three weeks in Albuquerque at a bed and breakfast with my partner waiting on the birth of our son. We chose our rental based on several factors, but possibly the most important that it was adjacent to the Los Poblanos Open Space. Located about a mile from the Rio Grande, the open space is surrounded by irrigation ditches, crisscrossed with walking and biking trails, and is home to the Rio Grande Community Gardens. The Los Poblanos fields include large areas planted with crops such as sorghum, corn and alfalfa.

Whether the creation of this inviting habitat was intentional or not, wildlife—especially the cranes—love this area. Daily, on our morning and evening walks, we would see the cranes flying in for a landing, croaking loudly to announce their arrival. Sometimes there were hundreds of birds; sometimes there were three. It never got old. No matter how many birds were there, we always felt privileged to be in their presence. Seeing the cranes up close gave me a feeling of something timeless and reassuring.

In Sierra County, we have an opportunity to invite back this part of the natural world that has been missing for far too long. By restoring a few key resources, we could give sandhill cranes what they are looking for along our stretch of the Rio Grande. There is likely land along the river somewhere in the county that could be used to supply food and lodging for flocks of cranes. Providing a nurturing habitat for these birds would also create a great community asset that both residents and visitors could enjoy.

I hope this idea inspires a plan of action so that someday, instead of circling overhead and then disappearing down river, the cranes will again land in Sierra County.

3 thoughts on “How sandhill cranes could return to Sierra County”