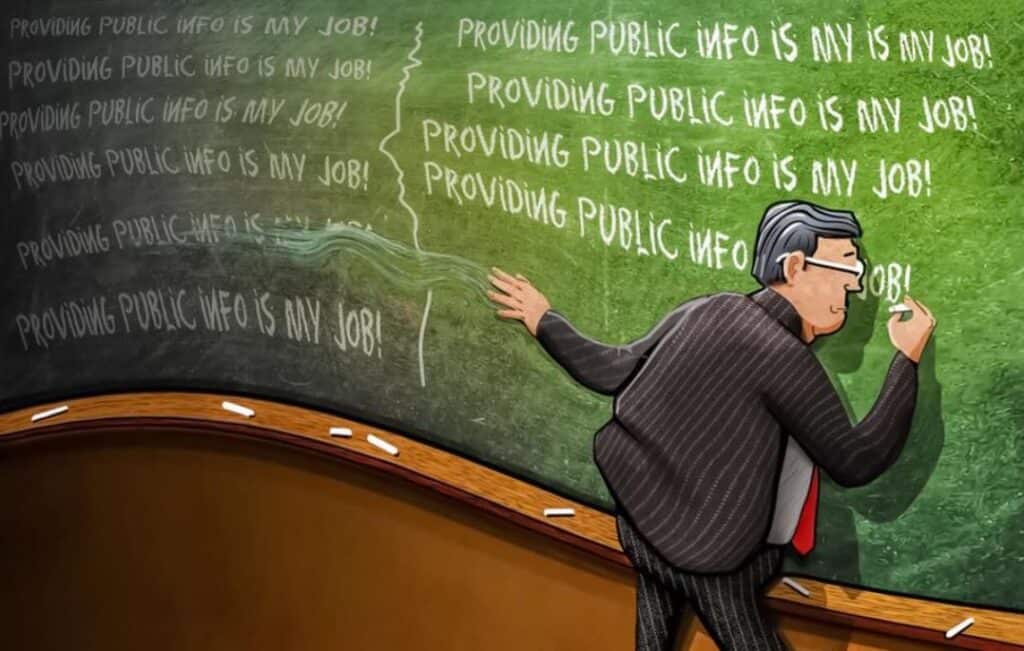 Truth or Consequences City Manager Bruce Swingle received a letter yesterday from the New Mexico Foundation for Open Government, warning him that the city’s recent imposition of fees to deliver electronic records requested under the provisions of the Inspection of Public Records Act is not allowed by state law.

“The New Mexico Legislature enacted IPRA in 1978 to provide the public with access to information that the public owns,”NMFOG Executive Director Melanie J. Majors stated, emphasizing that citizens have the right to obtain the greatest possible information about the workings of government.

Swingle had informed the city commissioners at their May 12 meeting that the city would start charging for IPRA documents “because it takes up staff time.”

Responding immediately if not directly to the Sun’s request for comment on FOG’s letter, Swingle acknowledged via email only that the city’s “IPRA procedures resolution is nearly 11 years old. I’m updating the city’s resolution and will present it to the commission very soon.”

FOG made the determination at the request of T or C activist Ron Fenn. Fenn recently submitted an IPRA request to the city clerk office for electronic documents relating to electric customers paying extra not to have a smart meter.The clerk’s office imposed a flat fee of 25 cents per page or $16 for 64 pages, which Fenn declined to pay, until he had received advice from FOG on the legality of the fee. The city fulfilled Fenn’s request at no charge after receiving FOG’s letter.

Majors stated the fee was improper. She cited a 2018 ruling made by the New Mexico Office of the Attorney General in a similar case in which the University of New Mexico charged a citizen more than $586 for electronic documents.

The university’s policy imposed a fee of 35 center per paper or electronic page.

“The policy is flawed on its face because . . . it charges the same cost [author’s emphasis] for both printed and electronic records,” Assistant Attorney General John Kreienkamp stated in the 2018 ruling.

The “employee time and effort the University expended to compile those records in response to his request could not be included in the proposed fee,” Kreienkamp explained.

Under the state’s IPRA law, 14-2-9 C (3) and (4), only the “actual cost” associated with “downloading” and “transmitting” electronic copies may be charged to the requestor.

T or C’s IPRA procedures resolution, which was passed in 2010, states a fee of 25 cents per electronic or paper page will be charged. Until recently the clerk’s office did not impose fees on IPRA requests made by the Sun or others.

TAGS: law | policies & practices
author
Kathleen Sloan is the Sun’s founder and chief reporter. She can be reached at kathleen.sloan@gmail.com or 575-297-4146.
Share this:
HAVE YOU SEEN?

The Sun found that the announcement contained a mixture of falsehoods, innuendo, culture war issues and some hard truths.

Reader Alice Hutchins of Truth or Consequences commented: WOW! Just wow…. Are you going to do this for all of the Republican candidates running for office? Sierra County Sun, is it possible to ease off just a bit on the Rabid Rebecca stance? I would love to see some research into all of the money and awareness she has brought into our area. She is a huge advocate for those left in the margins of society and is an honorable, honest woman. The campaign the Democrats from Sierra County waged against her last election cycle was an embarrassment to me, a Democrat. Yes, some of her stances are not mine, but if she knew she had the votes of sensible-minded people from across all party lines, then she wouldn’t have to pacify any of the crazies from the other side. We can continue to choose a party or person. I choose a person every time, party be damned.

Get the News No One Else is Covering