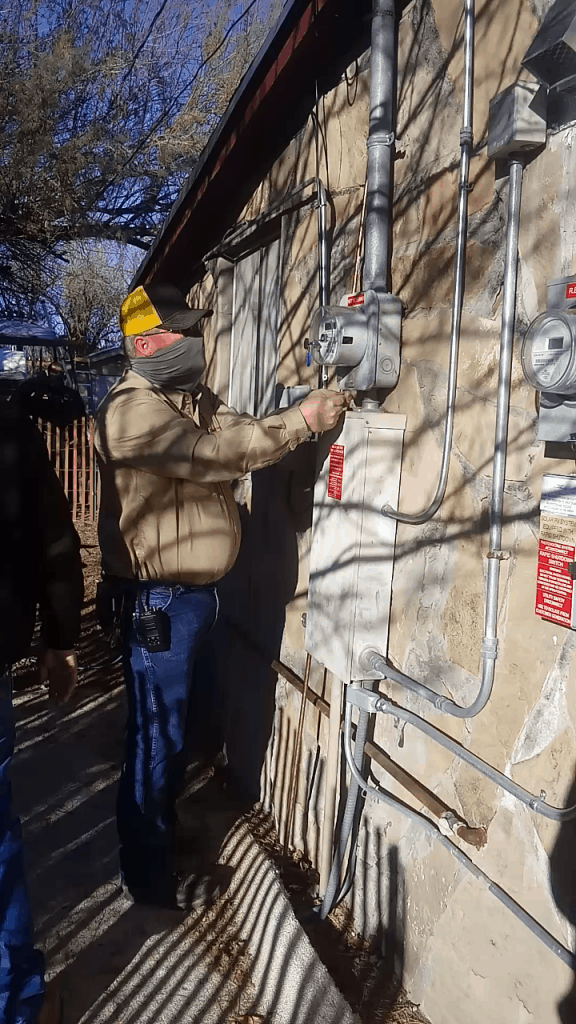 At 8:40 a.m. today, Truth or Consequences city officials returned Ron Fenn’s analog electric meter after he had spent a week with no heat and lights, restoring power it disconnected because Fenn tried to appeal the installation of a smart meter.

Fenn contacted Elliot, who called Madrid, Fenn said, “10 times”; none of his calls were returned by Madrid. Elliot then phoned City Attorney Jay Rubin, who arranged for Elliot to speak with Madrid on Dec. 14, four days after the disconnection. The assistant attorney general was not satisfied with the results of that conversation, according to Fenn.

Late in the afternoon of Dec. 14, Elliot (who declined the Sun’s request for an interview about his advocacy for Fenn) emailed Madrid a letter, urging him to turn Fenn’s power on immediately.

“While there is no specific statute prohibiting your actions,” Elliot stated in the letter, “you should know that as an employee of the City of Truth or Consequences, your actions as a public officer fall within the scope of the Governmental Conduct Act, NMSA 1978, § 10-16-1 thru 18. The Act specifically requires that public officers (1) treat their position as a public trust, and use their powers and resources to only to advance the public interest; and (2) that public officers conduct themselves in a manner that justifies the confidence placed in them by the people, and ‘at all times maintain the integrity and discharge ethically the high responsibilities of public service.’ NMSA 1978, § 10-16-3.”

Elliot went on to point out the Public Regulation Commission has forbidden service disconnections while Governor Michelle Lujan Grisham’s emergency health order is in effect. Although the city-owned electric utility isn’t ruled by the PRC, Elliot stated, “your actions nonetheless fall within the scope of conduct that the policy seeks to prevent, namely the disconnection of essential services to particularly vulnerable individuals, such as the elderly.”

“As Mr. Fenn is 77 years old,” Elliot said in conclusion, “the Office of the Attorney General respectfully urges that you return to him the meter he had before December 9, 2020, and restore his power today, December 14, 2020, and that his service remain in place until the appeal process has run its course.”

Madrid did not act on Elliot’s request, and Fenn remained without electricity throughout the next day, Tues., Dec. 15.

That afternoon, at 4:31 p.m., Elliot forwarded the letter he had written to Madrid to each of the city commissioners, with a note that concluded: “The Office of the Attorney General trusts that your prompt attention to this matter will result in Mr. Fenn’s original meter and service being restored tonight.”

Fenn had forwarded Elliot’s letter to Madrid to the commissioners the day before.

At 8:40 a.m. the following morning, Wed., Dec. 16, the same deputation of four city officials who had seized Fenn’s analog electric meter a week earlier came to return it: Chief of Police Michael Apodaca and a patrol officer and Electric Department Director Bo Easley and a department employee.

They had in hand a letter from Madrid, instructing Fenn him he must submit an appeals argument by Dec. 22. Evidently, the city has rejected Fenn’s prior appeals letter, which was submitted Dec. 9.

Two other residents are appealing city disconnect notices received after they, like Fenn, declined to allow a smart meter installer access to their properties. Their right of appeal is set forth in city code 14-30.

Lee Foerstner, owner of Riverbend Hot Springs Resort and Spa, forwarded to the Sun his letter appealing the city’s threatened disconnection of his electrical service on Dec. 18 if he does not allow the installation of a smart meter.

Ariel Dougherty told the Sun she is appealing her Dec. 22 disconnect notice.

The Sun has asked the city commissioners several times about their positions on the possible health risks, fire hazard and data breaches of smart meters. The Sun has asked for their comments as well on the inequitable exemption of 30 to 40 businesses downtown from the smart-meter installation program. None of the commissioners has ever responded.

The city commission has held its silence with the community, as well. The city commission denied the public the right to vote on a 10-year moratorium on smart meters—the petition drive and ordinance initiative spearheaded by Fenn last year.

The city commissioners remained silent at today’s meeting, each declining to use “response to public comment” section of the agenda to speak about the denial of Fenn’s due process and his week-long suffering.

While sitting as a quasi-judicial body in the upcoming appeals, the city commissioners will have the opportunity to explain the rationale for purchasing a $1 million smart meter system, when city resources are short, and imposing its installation on unwilling customers during a pandemic, when residents’ health is already at risk.

Fenn spoke during today’s city commission meeting. He took exception to Madrid’s letter—given to him 20 minutes before the meeting’s start—which stated the city was turning his electricity back on “consistent with the city’s policy of non-interruption of service during the holiday season” as insulting doublespeak.

“This is a public utility, owned by the people, not by Morris Madrid,” Fenn said.

TAGS: crises and controversies | policies & practices | utilities
Share this:
author
Kathleen Sloan is the Sun’s founder and chief reporter. She can be reached at kathleen.sloan@gmail.com or 575-297-4146.
DON’T MISS!

Cops and Electric Department Director Easley descend on community activist Fenn, leaving him without electricity and in the cold

City Manager Madrid denied Fenn his right to appeal the city's mandate that all residential electric customers must allow the installation of smart meters at...