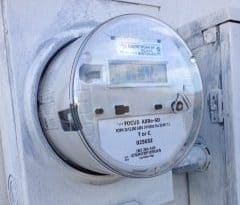 Truth or Consequences City Manager Morris Madrid said yesterday about 1,500 smart meters have been installed within its service area, replacing “one third to one half” of electric utility customers’ analog meters with radio-frequency operated meters.

Madrid has said in past city commission meetings the city-owned electric utility has about 4,000 residential and commercial customers. Landis + Gyr, a multinational manufacturer of meters and related software for electric and gas utilities, was awarded the estimated $1million contract to supply the meters in September 2019, as well as to oversee the software system installation for measurement and billing.

Madrid gave the smart-meter project update to the Public Utility Advisory Board at their Monday, Nov. 16, meeting. Madrid said he didn’t have exact figures to give board members.

PUAB Chairperson Jeff Dornbusch asked if the city was tracking the higher revenues the smart meters are expected to provide through more accurate consumption measurement. Dornbusch has said at past PUAB meetings that new smart meters for water customers would increase city revenue by 6 percent, but no authority has ever provided a similar figure for the electric smart meter project.

The city will start a revenue comparison after all the meters are installed, Madrid said, and after a month of data has been collected.

Madrid also told the PUAB the city is applying for a combination grant and loan to upgrade water utility analog meters to the same radio-frequency-operated smart meters.

The electric smart meter project “is a little ahead of schedule,” Madrid said. The installation company was expected to install between 50 and 60 meters a day, but is beating that estimate.

“We’ve had three written complaints,” about the installation of smart meters, Madrid said. About “a dozen or so” properties couldn’t be accessed by the company. The city left door “hangers” notifying property owners the installers would return, Madrid said.

The Sun has twice submitted Inspection of Public Records Act requests for a list of the customers exempted from having smart meters installed. Each time the city has responded: “No such document exists.”

New Mexico is among about a dozen states that do not require utility companies to provide customers with an opt-out choice on smart meters.

About 275 residents signed a petition in favor of a 10-year moratorium on the local use of smart meters shortly after the project was approved by the city commission, citing the health risks of high radio-frequency emissions, the meters’ record of causing fires and their high cost versus their unproven efficiencies.

In January the city commission refused to consider the resident-initiated ordinance, claiming administrative decisions were exempt from the state law requiring them to put successful petition ordinances on the ballot.

Ron Fenn and Lee Foerstner filed a lawsuit, also in January, claiming the city commission violated state law by not holding an election on the 10-year moratorium ordinance. The case has not yet been scheduled for a hearing.

TAGS: infrastructure | public boards | utilities
Share this:
author
Kathleen Sloan is the Sun’s founder and chief reporter. She can be reached at kathleen.sloan@gmail.com or 575-297-4146.
DON’T MISS!

The Truth or Consequences City Commission  approved about $20,000 in payments to Landis + Gyr after coming out of executive session May 13, apparently going…

Public outcry ignored, smart meters are still a go with City of Truth or Consequences

​Despite being presented with a petition signed by 250 registered voters in favor of banning smart meters for 10 years, Truth or Consequences City Commissioners…

​Document requests are in and it’s official. The City of Truth or Consequences did no planning or cost analysis, relying on vendor information to arrive…