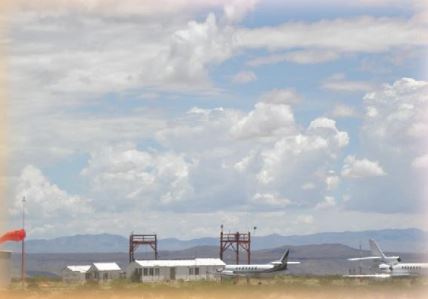 The municipal airport has recently reduced fuel prices to 10 cents per gallon above its purchase price to get back into compliance with a city resolution governing fuel charges. Source: City of Truth or Consequences

Chad Rosacker was hired as the Truth or Consequences airport manager about a month ago without the city commission being aware of it—a point raised by City Commissioner Frances Luna after Rosacker introduced himself at the commission’s April 14 meeting as the new airport manager and shared his ideas for increasing air traffic and revenues.

“We have procedures we need to follow,” Luna told Rosacker, while also assuring him she is not opposed to his ideas.

Interim City Manager Traci Alvarez interceded on Rosacker’s behalf. She told the city commission Rosacker was “an emergency hire,” since there was no response to advertisements made in October 2020 for a new airport manager. (A high school student was recently hired, also on an emergency basis, the commissioners learned.) Alvarez assured them that Rosacker’s contract ends with the fiscal year on June 30, 2021.

Before Rosacker’s contract expires, Alvarez said a request for proposals will be advertised seeking a private company or “fixed-base operator” to manage the airport—an idea that also was not brought before the city commission for approval.

The city may be looking to privatize management of the airport because it has not broken even in many years, if ever. Usually, the airport operates at about a $130,000 loss per year, requiring transfers from public funds to pay its bills. The 2019–2020 yearly audit, released to the public at the city commission’s April 14 meeting, shows the deficit spending increased to $238,212 last fiscal year.

None of the city commissioners objected to or made further comment about the plan to privatize management of the city airport.

Airport Manager Rosacker told city commissioners the city’s “liability issues” would be lessened if a fixed-base operator managed the airport, while reaping the “benefits” of an operator’s provision of various business services, such as mechanical repairs.

Rosacker said he is “managing the city airport on behalf of my company,” which is Tech 45 Enterprises, LLC. The company was registered September 2020 with the state and has a Las Cruces address.

In an interview with the Sun, Rosacker provided information that seemingly contradicted his statement to the commissioners. Asked whether the city has contracted with him as an individual or as a business, Rosacker said he could not divulge the nature of his contract. Asked if he is getting a commission or portion of any business revenues generated by the airport, Rosacker said he is being paid a “straight salary,” and added: “I have not started a business at the airport.” Rosacker would not reveal his salary.

The city clerk’s office said it would not respond to the Sun’s request for a copy of Rosacker’s contract until April 29.

Rosacker told the city commission he has 18 years of aviation experience, including being a pilot, doing flight tests, selling aircraft, engaging in military operations, and performing mechanical repairs and inspections for military and private companies.

Rosacker’s LinkedIn profile states he has worked in Mojave, California, as crew chief for Virgin Galactic’s mothership White Knight Two since 2014 to the present.

He told the city commission he moved from California two years ago and has been living in Truth or Consequences for about a year and a half.

Larry Mullenax, a member of the city’s Airport Advisory Committee, told the Sun in an interview April 15 that Rosacker still works for Virgin Galactic. “That’s his primary job.” He is working part time as the airport manager, Mullenax said.

Rosacker approached previous City Manager Morris Madrid and Alvarez, she told the commissioners, with a proposal that he provide mechanical services at the airport. “We were so impressed with him we asked if he would consider managing the airport,” Alvarez said.

Rosacker took full advantage of the opportunity to sell himself to the commissioners. Among his ideas to increase interest and traffic at the airport, he envisions “getting kids into aviation,” by offering educational programs in mechanics and other subjects. Offering flying lessons in rentable planes is another possibility, Rosaker said. Teaching people how to fly, “at a not-for-profit level,” by tapping local pilots who are instructors would reduce the cost of obtaining a pilot’s license by about 30 percent, he said.

Fly-ins to attract tourists and pilots was another of Rosacker’s marketing ideas.

Tech 45 Enterprises, said Rosacker, “will hire people soon, hire and train them locally”—an indicator that he believes that his company will become the airport’s fixed-base operator.

Rosacker said his wife is moving here soon and will talk to the private businesses in the area “to see how we can support them” through activities at the airport.

“People coming into the area and using services and staying in the area is the sole reason for the municipal airport,” Rosacker advised the commissioners.

A $1.4 million aircraft landed here last week, he reported, sharing his impression that the owner is now interested in moving to the area. “The economic impact” of a wealthy person moving to the area “is massive,” Rosaker opined. In order to attract and impress such clients, however, airport facilities need to be clean and well maintained, he said, and customer service has to be good. Improvements to these areas have been his focus during his first month on the job.

Increasing fuel purchases by 300 percent by the end of 2021 is another goal, Rosacker said. He attributed a 200 percent in fuel business during his first month to recently lowered fuel prices.

During his interview with the Sun, Rosacker said a “tenant” at the airport brought a copy of a resolution passed a few years ago that set the price of fuel at 10 cents a gallon above the city’s cost. The city had been charging too much, the tenant pointed out. The fuel prices were reduced, Rosacker said, “a few days before I was hired.”

Rosacker told city commissioners there is a “fast-growing” market of travelers who own small aircraft and like landing on dirt air strips, such as T or C’s. These people would likely be drawn to the city airport as a “gateway to the Gila [National Forest].” This could be an advertising focus.

Offering camping capabilities would provide an additional inducement for these small-aircraft pilots to land at the airport, Rosacker told the city commission.

“The airport has good bones,” Rosacker said. With a runway that can handle “medium-sized jets,” the airport should be able to tap into the “corporate aviation” market. “Corporations are used to high-end facilities,” he said.

Military traffic “is always good,” Rosacker said, and the airport’s location far from downtown T or C ensures that aircraft noise would not be an issue.

Improvements to the infrastructure to ensure all clientele “have a good experience,” will have to be made, Rosacker said. Providing a reliable courtesy car to transport people into town is a short-term need; the airport’s current vehicle is out for maintenance. A plan to improve the quality of the airport’s well water by installing a water-softening apparatus to de-calcify the water, possibly with grant funding from the state, is being developed. Washing planes with heavily calcified water, Rosacker said, “could be a liability issue.”

So could loose pebbles on the runway that could fly up and “cause $30,000 damage to a plane.” The city roads department is now regularly sweeping the runways, Rosacker said.

TAGS: business
author
Kathleen Sloan is the Sun’s founder and chief reporter. She can be reached at kathleen.sloan@gmail.com or 575-297-4146.
Share this:
HAVE YOU SEEN?

1 Comment on “New T or C airport manager has contract through June, search for private operator to begin soon”