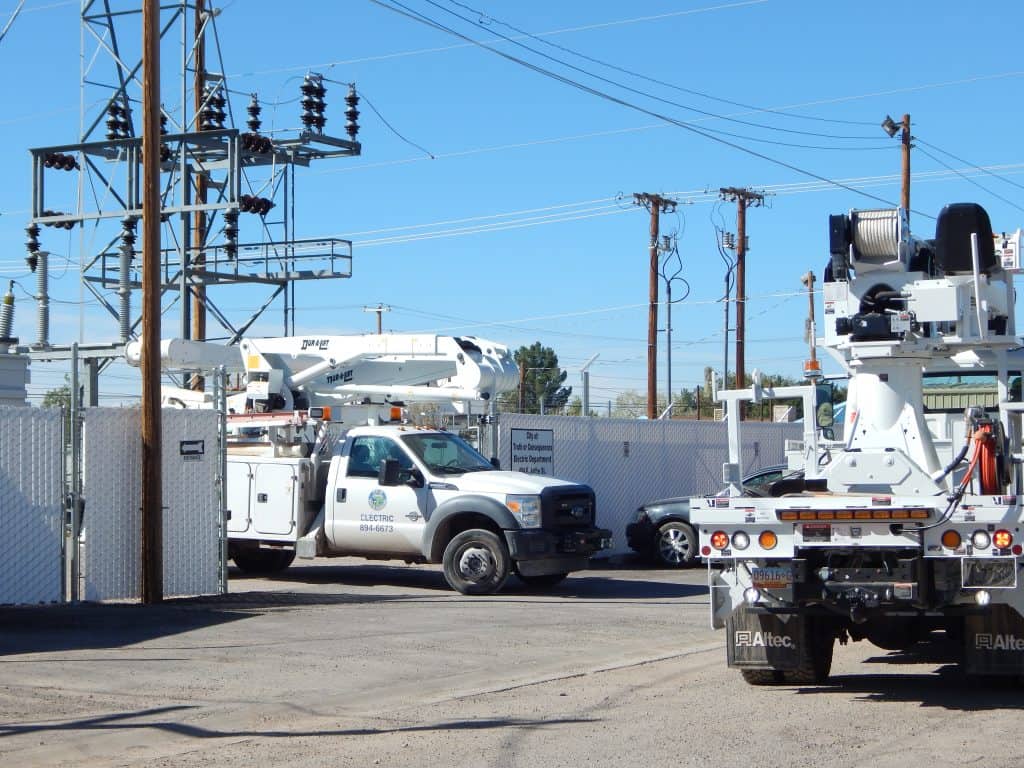 The problem: “The city is a utility that runs a municipality.” The solution may not be as easy as simply raising property taxes. Photograph copyright © 2020 by Ron Fenn

Truth or Consequences City Commissioners are looking into tripling the property tax rate after hearing a presentation from George Szigeti, past city commissioner and past public utility advisory board member.

Szigeti, sponsored by City Commissioner Randall Aragon, was allowed to give a presentation at the Oct. 14 commission meeting. Aragon said the same presentation had already been given to the T or C Chamber of Commerce.

The subject was the city’s improper governmental practice of transferring about $1.5 million a year out of the city-owned electric utility’s revenues and into the general fund to pay for governmental activities.

Business-like activities are the utilities, such as electric, water, wastewater and solid waste services. These “enterprise funds” are supposed to be “self-sufficient,” Szigeti said. Good government practice is to charge utility fees that support the operation, maintenance and capital improvements needed, according to state law 3-23-4 and 3-18-1, which govern the use of utility revenue and the setting of utility rates.

The city has not plowed the enterprise funds back into the utilities, but has neglected upkeep, replacement and repairs. City Manager Morris Madrid, during the city commission’s Aug. 26 retreat, said utility capital projects presently underway have increased from $4 million to $20 million in the 18 months of his tenure.

Szigeti said this money transfer “has been an issue for many years; for as long as I’ve been here.”

He estimated the city spends about $6 million a year on governmental activities, or, as he put it, “to operate the city.” The city’s general fund is the city operating fund.

The $1.5 million transfer from the electric fund into the general fund pays for about 25 percent of the cost to run the city, Szigeti said.

To avoid this $1.5 million transfer, Szigeti said some people have suggested the city cut back on staff. Szigeti rejected this alternative as unfeasible. “I spoke with city staff, and they said they are already shorthanded.”

The second alternative Szigeti presented was to increase the revenue from gross receipts taxes by $1.5 million, which would require the sale of $75 million more in goods and services by city businesses. “That would be nice,” Szigeti said, and “something we should strive for.”

However, to generate such dramatic growth would probably require increasing the sales tax by 1 percent, he said, bringing it to 2.685 percent. The city’s total gross receipts tax would then reach 9.5 percent, “which is over the state-mandated limit. Therefore this is not an option,” Szigeti said.

The third alternative was to increase property taxes “to be more in line with Elephant Butte’s,” Szigeti said.

The city charges residential property owners $1.44 per $1,000 of taxable property value, according to Szigeti. At that rate, he said the city earns about $170,000 a year to pay for governmental activities.

Elephant Butte charges residential property owners $4.22 per $1,000 of taxable property value. At that rate it earns about $255,000 a year, Szigeti said.

Szigeti argued that the city’s property tax rate is very low. Tripling it to $4.32, he said, would bring in an additional $340,000 in revenues.

The revenue figure he cited is only double, not triple the current property-tax revenue of $170,000. Triple the property tax revenue would be $510,000 in additional revenues.

He went on to note $1.16 million would still need to come out of the electric fund.

Szigeti said electric rates would not go up in his proposed plan. Instead he suggested that $500,000 of utility-fee revenues be labeled a “tax,” while keeping rates the same.

Szigeti did not say electric rates would go down by the corresponding $500,000 or so that would come from increased property tax revenues.

Therefore, Szigeti’s proposal would cost city residents about $500,000 more, with no relief on their electric bill.

City Commissioner Randall Aragon said, “This is a wake-up call. Just like the water and sewer black hole. We pay now or we pay later. We need to think about this.”

City Commissioner Frances Luna said, “The city is a utility company that runs a municipality.” She agreed: “We are undertaxed on property rates.”

However, she warned that “any time we raise utility rates or taxes; you have to let the public know what it is getting.”

Luna directed City Attorney Jay Rubin to find out “what the city can raise [property taxes to] without a vote.”

Luna then directed Manager Madrid and staff to “come back with projections—what the money will be spent on.”

Luna asked that the information be presented at the next city commission meeting.

Mayor Sandra Whitehead agreed with Luna: “We need to look at a plan. I always suggest we need to have a plan.”

Whitehead warned, however, “There is a lot of delinquency on property taxes,” and the city needed to be careful “we don’t run people out of their homes.”

Newly appointed Mayor Pro-tem Amanda Forrister said, “People move here because of low property taxes. We need to look at what this will do to our tax base.”

The Sun contacted Szigeti and each of the city commissioners, asking for comments on the absence of any budget cutbacks in Szigeti’s presentation to make up for the $1.5 million subsidy from the electric department.

“It’s clear that the City of T or C is a bare-bones operation,” Luna said, in an email. “I don’t believe anyone could accurately describe the City of T or C as having extra positions or spending unwisely. It is clear that every city employee is crucial to the operations and that if anything, we are in need of additional staff. I do not see cutting staff positions as an option for the city.”

The city commission asked very few questions about the budget when it was passed in July, accepting it, just as they accepted Szigeti’s proposal. And it looks like there is nothing stopping the city commission from increasing property taxes with a similar ease. The Sun asked the state Department of Finance and Administration if the city would have to put a property-tax increase to a vote. The answer, provided by Henry Valdez, DFA public information officer was, “no”; the city commission could do it by passing a resolution.

“Through a governing body, the City of T or C can approve a resolution to increase its imposed rate from 2.225 in any increment up to the 7.65  [statutory maximum],” Valdez elaborated. He further clarified: “The operational rates for counties, schools and municipalities do not require voter approval.”

Therefore, the city can increase property taxes up to $7.65 per $1,000 taxable value without voter approval.

Szigeti and Luna are correct in stating T or C has low tax rates. According to an annual DFA publication titled “Property Tax Facts,” T or C had the 13th lowest tax rate out of 106 cities in the 2018 edition (the most recent available).

However, the overall tax rate residents pay includes millage for Sierra County government, the school district and the Sierra Vista Hospital, in addition to the city’s portion.

The 2018 DFA publication states the overall tax rate for residential property in Sierra County was $22.66 per $1,000 taxable valuation. Sierra County ranked 14th lowest out of 35 counties. That puts T or C residents’ tax bill close to the middle of the pack.

The other matter to consider is property valuation. In Sierra County, in 2018, residential property owners paid 0.76 percent of their whole property’s value, ranking 16th lowest out of 35 counties, again in the middle of the pack.

It appears there are no easy solutions to bring the City of Truth or Consequences into compliance with good government practice regarding the expenditure of utility enterprise funds.

TAGS: finance | utilities
Share this:
author
Kathleen Sloan is the Sun’s founder and chief reporter. She can be reached at kathleen.sloan@gmail.com or 575-297-4146.
DON’T MISS!