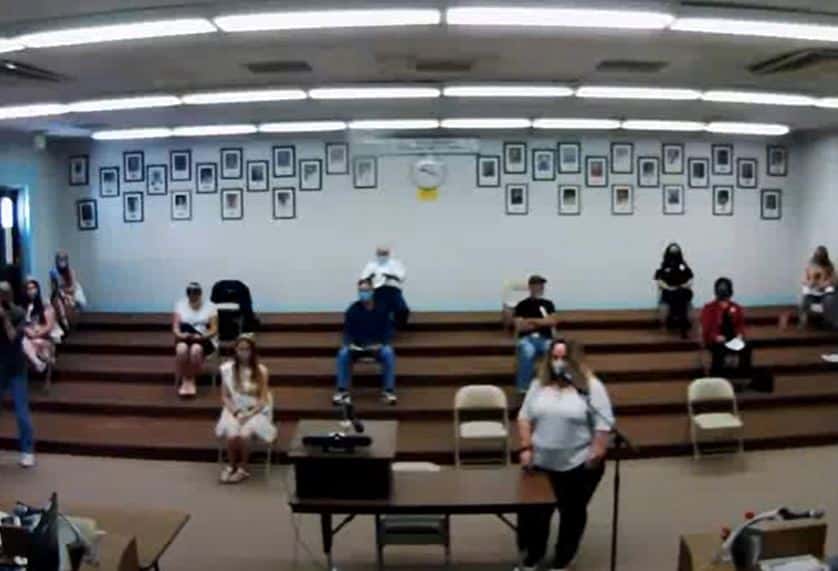 Community Development Director Traci Alvarez stepped to the public microphone in the T or C commission chambers last week to accept a certificate of appreciation for her recent service as acting city manager. Source: City of Truth or Consequences Commission meeting video

The Truth or Consequences City Commission approved the promotion of Community Development Director Traci Alvarez to assistant city manager at its May 12 meeting. The promotion had new City Manager Bruce Swingle’s enthusiastic support.

Swingle, as he promised during the commission’s May 5 budget hearing, presented a resolution that sets the city’s policy for collecting overdue utility bills.

At the end of the meeting, Swingle asked the commission “for direction” about which city officials and staff members should speak to the press, but received no guidance.

After former City Manager Morris Madrid’s resigned in early March, Traci Alvarez served as acting city manager for a little over two months until Swingle came on board, May 3. The May 10 meeting agenda called for Alvarez to receive a certificate of appreciation. She also received a promotion that was not on the agenda.

“Traci has shown time and time again she steps up to the plate,” City Commissioner Frances Luna said. “I say we make her assistant city manager. We are at the bewitching hour. It should be in the budget. Is it the will of the commission?”

“Normally I would need time to consider,” Swingle offered during the pause, “but I would very much support moving her into the assistant city manager position.”

Commissioner Randall Aragon questioned whether it was feasible for one person to serve as both the assistant city manager and community development director. “We can’t overwhelm her.”

City Clerk Angela Torres noted that William Slettom had served in both positions concurrently before his retirement about five years ago.

Swingle promised: “We will work on her workload.” Since Alvarez, he added, “would be doing both jobs anyway . . . she should be paid for it.”

“Thank you for your vote of confidence,” Alvarez said.

“There are a lot of informal policies or practices on collecting overdue accounts,” Swingle said, referring to Utility Office Manager Sonya Williams’ revelation at the commission’s May 5 budget session that unnamed superiors had sometimes intervened on behalf of delinquent utility customers to change the collection arrangements she had negotiated.

Favoritism or bullying and other inequitable treatment of utility customers with past-due balances can be prevented by “reducing practices to writing,” Swingle said, introducing a resolution clarifying the city’s collection policies.

Resolution 41 20/21 states city staff may “use all available resources authorized by ordinance or law to collect past-due utility accounts.”

Discretionary payment arrangements have been restricted, however. “The City will require residents having past-due utility account(s) to make full payment on current and subsequent monthly bills and pay off the balance within 12 months,” the resolution states.

In “rare and extreme circumstances,” the utility office manager may petition the city manager to allow a customer to pay off the overdue amount over a longer period of up to two years.

Mayor Pro Tem Amanda Forrister asked if past-due balances were “tied to the person, not the property?”

City Attorney Jay Rubin cited city ordinance 14-36 (H), which allows the city to “file a lien against the property.”

“That doesn’t sound reasonable to me,” Commissioner Aragon said. He expressed the opinion that a landlord should not be held to account for a renter’s utility debt.

Commissioner Luna, taking matters into her own hands, directed the utility office to inform landlords they can be held responsible for tenants’ utility bills. She also unilaterally declared they should be told they can receive copies of tenants’ utility bills, a means of staying apprised of the status of those accounts.

During the city manager’s report, Swingle asked the commissioners for “direction” on how to handle the press.

“Do you want me to answer their questions?” Swingle asked. “Do you want the press to have access to department heads? It’s not that they don’t know the answers. They are very knowledgeable.”

He attributed the public demand for more government transparency in part to the practice of prior city managers, who insisted on “signing contracts that the public often doesn’t know about.”

“That has to change,” Swingle stated.

Only Commissioner Aragon responded to the city manager’s request for guidance about how to handle inquiries from the press—by throwing the ball back to Swingle. “Concerning media access,” Aragon said, “tell us what you want.”

TAGS: agencies & departments | policies & practices | utilities
author
Kathleen Sloan is the Sun’s founder and chief reporter. She can be reached at kathleen.sloan@gmail.com or 575-297-4146.
Share this:
HAVE YOU SEEN?