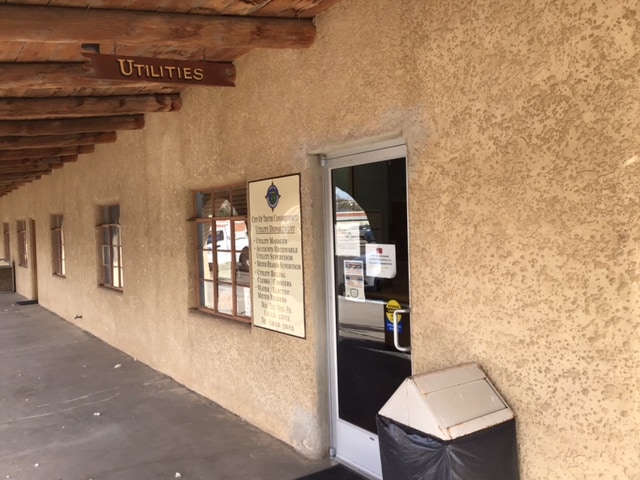 Commissioners Frances Luna and Amanda Forrister expressed the opinion that the utility office's collection procedures are too lenient after looking at summaries of 15 representative past-due accounts that raise the question of how these and other significantly delinquent customers will ever catch up on their utility bills. Photograph by Diana Tittle

A staff report that the City of Truth or Consequences is carrying $700,000 in unpaid utility account fees prompted the city commissioners’ outrage and immediate action to reimpose red-tag procedures suspended during the pandemic.

At the commissioners’ second March meeting, acting City Manager Tracy Alvarez handed out summaries of 15 representative past-due accounts. She then asked the commissioners to approve the resumption in May of red-tagging, the practice of leaving notification of imminent disconnection on the doors of delinquent customers. Red-tagging normally takes place when a utility customer has not made a payment for two billing cycles and ignored a delinquency letter allowing the recipient five days to make payment arrangements. Once customers receive a red-tag warning, they have another five days in which to make payment arrangements.

The commissioners audibly gasped when Alvarez reported the $700,000 in delinquencies. Alvarez confirmed that around $200,000 in arrears had been racked up in one recent month alone. The latter figure approximates the $236,657.33 labelled as “Total Arrears” in the city’s January 2021 “Monthly Billing Report” for utility services.

Alvarez provided the commissioners with no documentation of how staff arrived at the cumulative total of $700,000 in past-due utility bills, although she did report that commercial customers accounted for 35 percent of the total.

Alvarez subsequently declined to answer the Sun’s question about how many of the city’s 4,100 utility customers were behind on paying their bills. She acknowledged only that the $700,000 in arrears came from “active delinquent accounts.”

Alvarez confirmed at the March 24 meeting that T or C’s fiscal 2021 budget “factors in our expectation that people will pay their bills.” The amount in arrears represents about 6 percent of the $11 million the city expects to collect in utility revenues this fiscal year.

Alvarez told the commissioners that she had been “a little shocked” when she recently asked the utility department to pull current revenue figures for inclusion in several grant proposals. “That’s when I noticed the drop in our revenues.” Later in the meeting, she reported that only 30 percent of this year’s budgeted utility revenues had been collected to date.

Yet, in its second-quarter financial report to the New Mexico Department of Finance and Administration, T or C reported that revenues realized for each of its utility services stood at 50 percent or higher of the amount budgeted as of Dec. 31.

Although incomplete, the 15 summaries of representative past-due accounts—which detail every bill, payment, penalty, penalty reversal and customer notification posted between March 2020 and March 2021—are the most reliable documentation of the city’s collection problems available. City staff chose these particular customers to “reflect accounts with high delinquencies and accounts that have not made regular or frequent payments,” Alvarez explained in response to a question from the Sun.

“I think it is irresponsible, ridiculous, unacceptable that the residents of our community expect us to continue providing them with water, electricity and sewer without making a payment because, by god, we know they’ve been paying their cell phone bills,” Commissioner Frances Luna said. “I don’t want to wait till May. We hear about how we need to make these infrastructure improvements, but if our citizens are not paying their bills, we can’t do any of that.”

Luna then made a motion to reinstate red-tagging procedures “immediately.” Commissioner Amanda Forrister seconded it, having picked up a hopeful comment by Uility Office Manager Sonya Williams that delinquent customers might use some of their tax stimulus or tax refund monies to pay down their arrears.

“Why are we waiting until May?” Forrister commented. “These stimulus checks might be spent by then before they get their warning that their electricity is going to be turned off.”

The motion on the table prompted the most animated discussion of an issue by the commissioners in recent memory.

Mayor Sandra Whitehead weighed in first. “For months now we’ve had people who have been disgruntled, especially after we installed the AMIs [advanced metering infrastructure], and they complained about how they were receiving astronomical bills for seven, eight, nine thousand dollars,” Whitehead observed. “I have to say after Sonya [Williams] looked into the astronomical bills, she found that the people who were complaining and fussing and telling us that we were wrong, wrong, wrong, were actually delinquent and hadn’t paid in months. It’s not fair!”

Whitehead continued: “Also, some people got very small to no bills. Did they ever call to tell us. No! Cause that was in their favor.”

“In all fairness,” the mayor said in conclusion, “please, please help us. At least make a payment arrangement, at least pay something.”

Having studied the delinquent account with the highest amount in arrears, which belonged to a citizen who over the past year had paid only $500 toward a $14,000 balance despite the city’s having reversed $1,100 in late payment penalties, Commissioner Luna again expressed her outrage.

“We have to start taking them to court or whatever we can do legally, Jay,” she said to the city’s attorney, Jaime F. (Jay) Rubin. “You’re not just taking advantage of the City of T or C. You’re hurting your neighbors, the police department, the library, you’re hurting everybody.

“We have to be strict,” Commissioner Forrister agreed. “We aren’t asking them to pay for something they haven’t already used,” she said a few minutes later. She added: “People need to be more conscious of what they’re doing. If they can’t pay the bill, turn off the dang TV.”

“If someone skips out, we can put a lien on their property, right?” Commissioner Randall Aragon observed.

“That’s one option,” Attorney Rubin confirmed. Rubin advised the commissioners that municipal codes provided all the collection tools needed and that it would be best to pass a “simple motion saying that we will enforce all our existing ordinances in the collection of our utility bills.”

“That is my motion,” Commissioner Luna said. Commissioner Forrister seconded it, and the motion passed unanimously.

In March 2021, after more than a year during which T or C had suspended red-tag notifications for compassionate reasons, the total arrears on those 15 accounts had mounted to $90,000. This past-due balance was up 50 percent from March 2020, when the total arrears on those 15 accounts stood $45,000. In other words, the city was experiencing a significant delinquency problem before COVID-19 hit.

In response to commissioners’ questions, staff described several collection procedures whose leniency may explain why, as Utility Office Manager Williams put it, “some of these accounts are to the point of how are they ever going to get caught up.” Policies that may contribute to the nonpayment problem include:

• the “45-to 50-day” window—according to Williams—that delinquent customers are given to make arrangements for payment before they are red-tagged.

• the lack of a significant payment—perhaps tied to a percentage of the utility customer’s total arrears—required to forestall disconnection. The residential utility customer with the notorious $14,000 delinquency was, for example, able to prevent his loss of utility services in October 2020 by making a payment of only $259.49.

• the ability of delinquent utility customers to make three successive plans for payment of arrears when they are unable to meet the first or second plans.

• the ability of landlords whose previous tenants have left behind unpaid utility bills to—as Alvarez explained at the March 24 commission meeting—“come in and certify that new tenants are coming in” in order to get a new utility account established.

T or C’s commissioners left decisions about whether these potential loopholes should be closed for another time. The following day, T or C posted this announcement on its public information page on Facebook: “Effective immediately, the City of Truth or Consequences Utility Office will begin the process of Red Tag and disconnects for nonpayment.”

Diana Tittle is editor of the Sun.