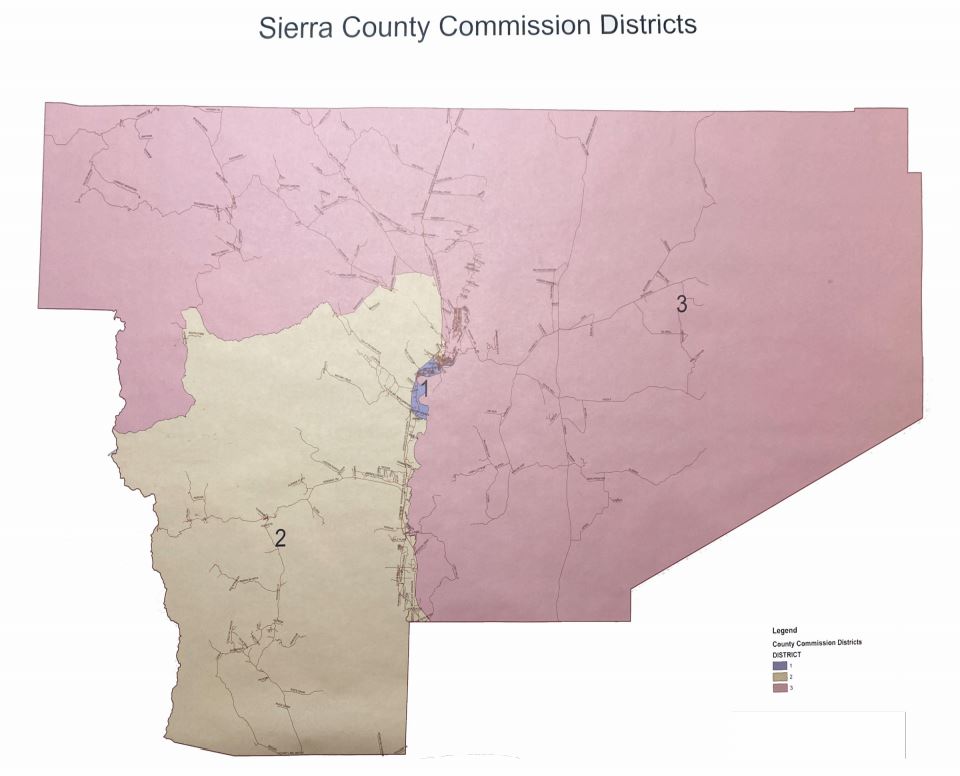 If a referendum on the special hospital district makes it onto the November ballot, candidates for its five-member board of trustees will be elected at the same time. Candidates can run to represent the Sierra County Commission district in which they reside or for two "at large" positions. Source: Sierra County Government

For the last two years the Joint Powers Commission, the financial overseer of Sierra Vista Hospital in Truth or Consequences, has been pushing to change the hospital’s ownership structure to that of a special hospital district. So far, the only reason given for the change is that oversight by two separate boards with 21 members combined—as the hospital’s governance is presently structured—represents “too many cooks in the kitchen.”

The JPC is leading a quiet petition drive to place the question of whether to create a special hospital district on the November ballot. Two attempts to persuade the state legislature to form the district have failed, and now the JPC must convince Sierra Countians to vote for it on Nov. 2.

The hospital will still be publicly owned, with the owners’ representatives and financial overseers being five elected officials. Sierra Countians will be more directly represented as the hospital’s owners if the special hospital district is approved at the polls.

Currently, elected officials sitting on the Sierra County Commission, Elephant Butte City Council, Truth or Consequences City Commission and Village of Williamsburg Board of Trustees sit on the JPC, the “owner’s board.” The public’s interests are also represented by non-elected members of the public chosen by the elected members of the four local governments to sit on the hospital Governing Board, which oversees day-to-day operations.

The JPC must turn in the petition to County Clerk Shelly Trujillo by mid-June with the required 472 signatures of qualified voters. Trujillo and her staff will certify whether the signatories are qualified. The certified petition must be turned in to the Secretary of State by June 24 in order to appear on the November ballot.

Candidates for the special hospital district board of trustees will also be on the Nov. 2 ballot, if the petition is certified. Those interested in running must formally declare their candidacy by filing with the county clerk on Aug. 24, according to Trujillo.

Last month the Sun requested information about the JCP’s plans for the petition drive and the fall election campaign and details about the restructuring itself from JPC Chairperson Kim Skinner, who is mayor pro tem of Elephant Butte, and JPC member Jim Paxon, who is chairperson of the Sierra County Commission.

Receiving no response, the Sun then sent questions to Sierra Vista Hospital CEO Eric Stokes via email. The Sun asked how the ownership changeover would happen; whether the hospital had the ability to pay off debt from the taxes the four local governmental entities already collect on the hospital’s behalf; and if the JPC would inform the public that their yes vote will create a new countywide taxing district.

This week, Paxon answered the questions sent to Stokes, speaking “as a member of and for the Joint Powers Commission of the Sierra Vista Hospital.” The questions and answers—lightly edited for clarity—follow.

1. Have you investigated what the sale or turnover of the current hospital ownership will be? That is, from the two-board JPC/Governing board to the five trustees? Will all assets and debts have to be negotiated by the two parties?

2. It appears that the JPC is leading the petition drive to get the special hospital district and five trustee candidates on the ballot. Do you know anything about town halls, their locations and dates, and who will be communicating with the public?

No town hall dates have been planned, but will be scheduled after the filing for the ballot measure. Posting of the schedule will be in several places, but for certain on the Sierra County website under Sierra Vista Hospital.

3. What knowledge base should a special hospital district trustee have? Do you consider it your job [this question was directed to Stokes as a hospital administration expert and as Sierra Vista’s CEO] to train them once they are elected?

Those individuals who have an interest in serving as a trustee on the Special Hospital District Board would need to submit their names to the Sierra County Clerk after the filing for the special hospital district measure, either for one of the three county commission districts, which require residency within the district, or for the two “at large” positions on the November ballot. The election would decide the five trustees by majority, the same as any local elections. There are no prerequisites for the positions, but I would assume that candidates would campaign for the position for which they run.

The primary purposes of the special hospital district are to minimize confusion, reduce the challenge in operating the hospital under two boards with a total of 21 members and, finally, have the special hospital district trustees report directly to the people who elect them, the citizens of Sierra County, much like a school board. I believe that those folks who are interested in continuing to provide the best health care possible for the citizens of Sierra County will be elected and they will be committed to communicating with the public.

4. Currently $30 million in hospital construction debts are being paid by gross receipt taxes and property tax. The hospital loan payment is over $1.46 million a year starting May 2021. In years past, the local taxes have been insufficient to pay this amount. Where is the needed extra money coming from?

I am rather curious as to the negative tone of this question. Who says the hospital isn’t able to pay the loan? Currently, the hospital is more than just solvent; it is in excellent financial health. The property taxes (Sierra County 2 mill levy) and gross receipts taxes commitment from each of the four entities would continue, and N.M. Department of Finance would continue to intercept that amount annually. In addition, through daily functioning, the hospital is required by law to keep a reserve of 130 percent for the annual loan payment from the operation proceeds of the hospital. This amount is measured and secured monthly.

State Senator John Arthur Smith was instrumental in getting capital improvement projects for the completion of the new hospital and for refinancing the loan. One of the successes of the JPC/Governing Board and Quorum’s hospital management, which include our new CEO, Eric Stokes, is that we are current on loan payments and have a healthy reserve fund to be absolutely sure that we remain that way.  Recent covid assistance and a large PPP [Paycheck Protection Program] loan also assisted the hospital through the covid crisis.

The proposed special hospital district would have authority to levy taxes, but currently and, in the foreseeable future, there is no anticipated need for a change in taxes.

Several members of the JPC and the Governing Board will be involved in the town halls. Information will be presented and questions will be taken. A schedule of times and places for the town halls will be posted on the Sierra County website under “Sierra Vista Hospital,” as well as on the other entities’ websites. I believe that the appropriate time for town halls is in early fall, prior to the election.

TAGS: elections | finance | medical | public boards
author
Kathleen Sloan is the Sun’s founder and chief reporter. She can be reached at kathleen.sloan@gmail.com or 575-297-4146.
Share this:
HAVE YOU SEEN?

If a referendum to create a special hospital district is held this November, county voters will essentially be deciding whether to increase their property taxes...

What lessons can be learned about how to make this form of hospital governance work to improve patient care from Lovington, NM's experience?

The veteran senator supports the creation of a special hospital district because of his firsthand knowledge of the hospital's management, financial and governance problems.