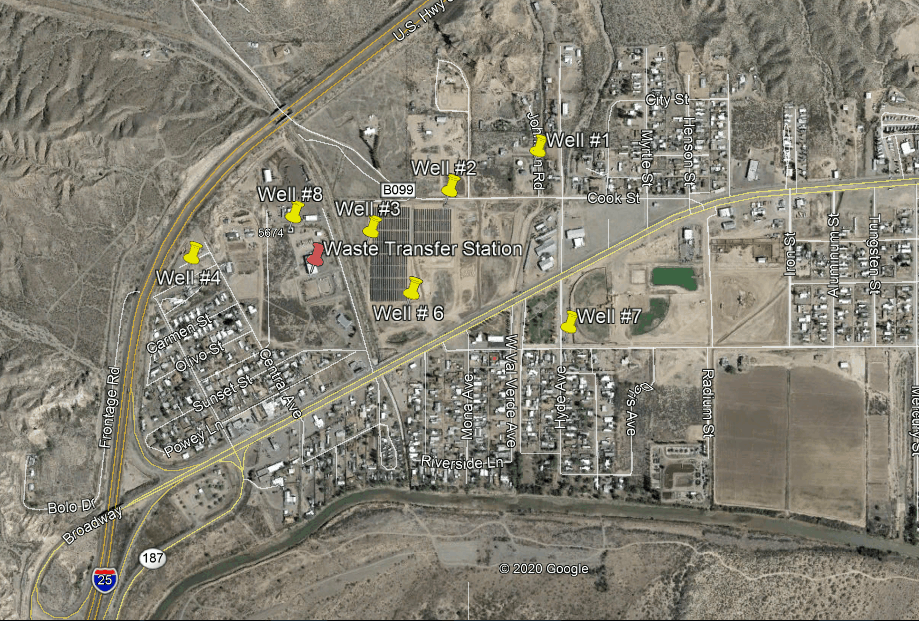 Truth or Consequences officials have not been frank about the condition of the city’s sole well field, located in the southern end of town off South Broadway Street near the municipal waste transfer station.

The legal notice directed bidders to the city’s website to find a Request for Proposals document to bid on fixing the wells. The RFP, which asks for responses by July 21, describes the problems with the pumps in Well 6 and Well 7, which have never been revealed in a public meeting.

The city commissioners and the public have only been apprised by Water and Wastewater Director Jesse Cole that Well 8 is offline.

A Sun investigation published in late February revealed that only three wells had, as of that time, been operational since June 2017. Cole subsequently gave a rare public report to the commission in March, assuring the commissioners that “all of our wells are safe and sanitary with 100 percent confidence.” He publicly dismissed the Sun’s reporting as “incredulous blogs.”

City Manager Bruce Swingle confirmed the thrust of the Sun’s reporting in alluding vaguely to the water well problems during the commission’s special budget meeting on May 5. His remark referenced costs to be incurred in the near future that were not included in the budget. Cole’s presentation on his department’s budget was void of any reference to well problems.

Clues to the problems with Wells 6 and 7 are contained in the 46-page RFP seeking bids on their repair. It gives the following “background” information to potential bidders:

“Wells have been having issues with alignment of shaft, bearings, pumping.”

“Well #7 started leaking liquid with oil and metal filings from around the well seal while it is in operation [while the pump is working]. We have shut it down.”

“Well #6 is similar in that it is leaking some oil and water solution when running, with some intermittent shaft vibrations that occur. This well is also over-pumping its maximum gallons per minute. This is causing it to cavitate to some degree. [Cavitation refers to bubbles that form and pop, causing pressure changes that could damage pump parts]. This well is still in operation during daytime hours on manual operation.”

The work to be done on both wells is to disconnect and remove the well pump, to troubleshoot pump-motor problems and to assess the condition of the well casing.

The Sun investigated the condition of city wells after Cole made an alarming statement during a Jan. 27 city commission meeting. In response to a question, Cole stated that his top priority capital project would be the construction of a new well in the northern part of town. When a city commissioner disagreed, stating that replacing antiquated water system pipes took priority, Cole responded with unusual candor. “If there is no water to put in water lines, there is no need to replace them,” he said.

The Sun’s investigation also revealed the city’s irregular and incomplete reporting on the condition of its water system, including its water wells.

The sole document posted on the city’s website under the water department tab is the 2019 “Consumer Confidence Report,” authored by Cole. The federal Safe Drinking Water Act requires water system operators to make public an annual CCR. There is no 2020 CCR on the T or C website.

The 2019 CCR states it is a “snapshot of last year’s water quality,” making it nearly three years out of date, since it details water conditions in 2018. Because of lack of timely written updates, it is critical that city officials speak to the press and public about current water issues. Cole has steadfastly refused to respond to the Sun’s requests for an interview.

This claim is contradicted by the city’s “water production” documents from 2017 through 2020, obtained by the Sun via IPRA (Inspection of Public Records Act) requests. Wells 1, 2 and 6 have produced water consistently since 2017. The operation of Well 7 has been inconsistent.

Documents about well examinations provided by the city contain additional details about the conditions of Wells 7 and 8.

Well 7 went offline temporarily in July 2017, when it was examined via video camera by Wells Surveys Company of Hereford, Texas. The examination found the water dark and cloudy at the upper and lower parts of the well.

Water production documents show that, after it was examined, Well 7 operated sporadically at a reduced capacity through 2019. The RFP—the most recent available information on Well 7—reveals that it has been shut down, but does not provide the date when it was taken offline.

Well 8 has not operated since May 2017, according to water production documents. In his March 10, 2021, report to the city commissioners, Cole explained the nature of Well 8’s problems, divulging information that he had refused to provide before the Sun published its investigation.

“Well Number 8 that is in question has mechanical failure and case slippage,” Cole said, providing the following opaque elaboration. “This means that the casing of the pipe has either shifted or broken or is misaligned, not allowing the vertical turbine to properly rotate. At several points down the column shaft, you have bearings that hold this thing centered in the middle, so your pipe doesn’t start wobbling. And without proper alignment on your casing that can’t happen.”

Now, Well 6—the highest producing well in 2019, according to water production documents—is also in trouble.

In August 2019 Well 6 pumped 18.7 million gallons, compared to Well 1’s production of 14.2 million gallons and Well 2’s 9.4 million gallons. Well 6 is now pumping only during daylight hours, the RFP acknowledges. It must be operated manually, presumably to allow water department workers to turn the pump on and then off when it “cavitates.”

Despite Well 8’s having been offline since 2017; the unexplained shutdown of Wells 3, 4 and 5 some time before 2017; and new problems of unstated duration with Wells 6 and 7, Cole told the commissioners during his March 10 report that there is no risk that the southern well field will fail.

“My recommendation . . . to install a new well . . . has nothing to do with failing wells that we have existing or a failing well field, as has been implied [by the Sun]. . . . This [recommendation] is not in regards to our existing wells having issues.”

Cole went onto promise: “If they were not safe, the public would be made aware immediately.”

TAGS: agencies & departments | infrastructure | util | water
author
Kathleen Sloan is the Sun’s founder and chief reporter. She can be reached at kathleen.sloan@gmail.com or 575-297-4146.
Share this:
HAVE YOU SEEN?

1 Comment on “T or C still mum about problems with city’s water wells, despite only two of eight working properly”